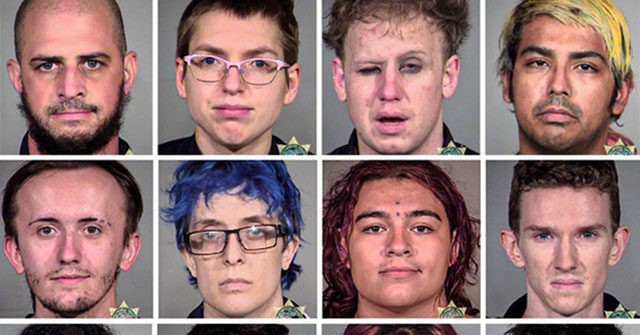 Portland police arrested dozens of rioters in the city over last weekend’s protests, which were dominated by Antifa activity and continued violence against police officers.

Over 50 people were arrested as a result of Saturday’s protests in the Democrat-run city. Demonstrators tossed firebombs, rocks, and commercial grade fireworks at police. Fifteen more were arrested in the protests taking place the following night, as rioters set fires and blocked roads.

Journalist Andy Ngo posted several mugshots of the most recent arrestees, many of whom were quickly released without bail.

Deidra Rose Watts, formerly known as David, was among those arrested on Sunday. Watts is reportedly “part of the #antifa press crew” and has since been released without bail.

Similarly, Gerald Kohler, 19, and Lucas Angell-Atchison, 25, were also arrested as a result of last weekend’s protests, and both were quickly released without bail as well:

Demetrus Gene Batchelor, a wanted fugitive, was also among those arrested from last week’s protests on September 5:

Demetrius Batchelor, 34: felon in possession of a firearm & a wanted fugitive https://t.co/NAj7RBB2hR

These people were arrested at the violent #antifa protest, cited & released on the spot. All have addresses listed in Portland. #PortlandRiots

The Portland Police Bureau has spent $6.9 million on overtime as a result of the riots in June and July alone — a stark irony, given the rioters’ calls to defund the police.