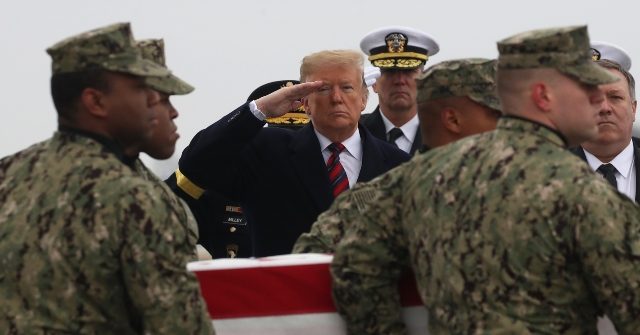 Fuentes unequivocally denied The Atlantic’s report last week, a huge blow to the establishment media narrative. Fuentes personally briefed President Trump on the weather situation that led to the trip being canceled. He is also a close personal confidante of former White House Chief of Staff John Kelly.

“You can put me on record denying that I spoke with The Atlantic,” Fuentes told Breitbart News on Monday. “I don’t know who the sources are. I did not hear POTUS call anyone losers when I told him about the weather. Honestly, do you think General Kelly would have stood by and let ANYONE call fallen Marines losers?”

He specifically also stated that he believes The Atlantic’s sources “are unlikely first hand accounts.”

“They are conflating those people from something the day after,” Fuentes said.

Fuentes also told Breitbart News he is upset that Trump has been speaking negatively about Kelly.

“On a separate note, I am disappointed to see POTUS talk about General Kelly so negatively in the middle of being accused of saying negative things about the military,” Fuentes said. “If anyone understands selfless service, it’s General Kelly.”

The fact that Fuentes—Kelly’s closest ally—is now publicly denying the report from The Atlantic is a monstrous strike against the credibility of the report. Several Trump critics, including former National Security Adviser John Bolton, have also denied this happened.

Every person who was allegedly in the room who has spoken up so far has denied the account of what happened. Fuentes’ denial, reported here exclusive on Breitbart News first, deals another strike against The Atlantic’s credibility.

“I also think any President, regardless of political affiliation, deserves to have candid and private conversations with trusted advisors,” Fuentes added in a text to Breitbart News. “If the President decides to talk about it, that is his right, but generally, I don’t think it is my place to divulge private conversations I’ve had with him.”