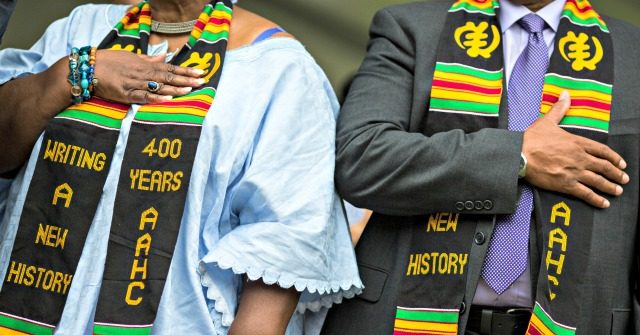 President Donald Trump on Monday criticized the New York Times “1619 Project” as “revisionist history” that should be banned from schools.

The president was asked by a reporter why he rejected the idea of the New York Times 1619 Project claims after Trump threatened on Sunday to defund California schools if they implemented the curriculum.

“I want everybody to know everything they can about our history,” Trump said during a press conference at the White House. “I’m not a believer in cancel culture. The good and the bad. If you don’t study the bad, it could happen again.”

“The 1619 Project,” developed by the New York Times Magazine, argues that America’s true founding date wasn’t 1776 but 1619 — the year that slaves from Africa were first brought to the colonies.

“We grew up with a certain history, and now they’re trying to change our history, revisionist history,” Trump said after he was asked about the project.

New York Times reporter Nikole Hannah-Jones falsely claimed in her project that the Revolutionary War was fought to preserve slavery, a concept that was immediately challenged by historians but won a Pulitzer Prize anyway.

The president criticized the ongoing campaign against American statues and monuments, specifically referencing a proposed plan in Washington, DC, to remove or rename some of the country’s greatest federal monuments.

“This is the big stuff, and they want to rename it, they want to redesignate it, they want to take stuff down,” Trump said, referring to buildings, statues, and monuments of founding fathers such as George Washington and Thomas Jefferson. “No, we don’t do that. Not going to happen with me, I guarantee you that.”