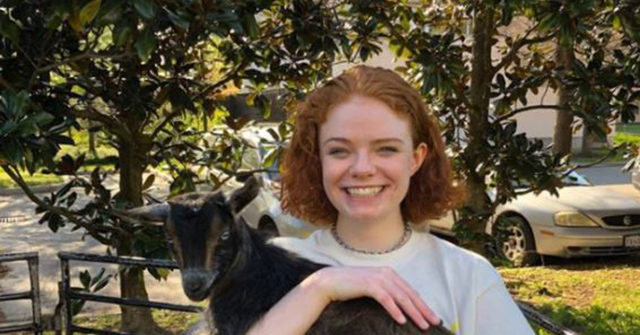 A wealthy college student from New York City was one of the eight rioters accused of smashing windows and spraying graffiti in downtown Manhattan on Friday.

Clara Kraebber, 20, is a well-to-do Upper-East-Sider whose mother is an architect for Kindred Arch.Works, which designs spaces for Columbia University and New York University. Her father is a child psychiatrist who teaches at Columbia University’s Department of Psychiatry, the New York Post reported.

In 2016, the family purchased a $1.8 million 16th-floor apartment on East End Avenue; the family also owns a home in Litchfield County, Connecticut, with four fireplaces that dates back to 1730.

Kraebber was one of eight people arrested for allegedly causing more than $100,000 in damage during a three-hour rampage from Foley Square to 24th Street. Far-left groups calling themselves the “Revolutionary Abolitionist Movement” and the “New Afrikan Black Panther Party” organized the riot.

But despite Kraebber’s lavish upbringing, she is no stranger to street protests.

She interviewed with the New York Times in 2014 explaining why she joined a Manhattan rally on behalf of the Michael Brown shooting in Ferguson, Missouri. Kraebber was a 14-year-old student at Hunter College High School at the time.

“We don’t have much political power right now, being youths, but this is something we can do,” she told the Times in 2014.

Now, she is a student at Rice University in Houston, according to her LinkedIn page. According to the Post, she was a member of the Rice Young Democrats and helped Beto O’Rourke try to unseat Sen. Ted Cruz (R-TX) in the 2018 Senate race.

She faces a charge of first-degree riot and up to four years in prison if convicted.