New York beachgoers were greeted with what appears to be a grim anti-Cuomo banner in the sky Saturday. “THE GOV KILLED NANA,” read the banner carried on a propeller plane that flew across New York City and Long Island beaches, according to accounts on social media.

Gov. Andrew Cuomo has been widely criticized for his handling of the state-regulated nursing homes, where at least 6,447 New Yorkers died during the health crisis.

One Rockaway beachgoer told The Post the plane flew by around 4 p.m. as observers stopped to take pictures and applauded the message. “The people were going crazy,” the beachgoer said. “[Cuomo] is nothing but a liar, condescending and miserable person. His carelessness caused the death of a lot of people unnecessarily.”

Rich Azzopardi, a spokesman for the governor, said the stunt could only come from “conspiracy nuts.”

“Everyone knows this governor has worked day in and day out to protect all New Yorkers and that’s why these sad politically motivated lies always land with a thud and I have no comment on how conspiracy nuts want to waste their money,” he said in a statement.

Lawmakers and outside watchdogs are attempting to determine the governor’s responsibility in the deaths. Cuomo’s Health Department issued a now-controversial March 25 mandate that barred nursing homes from turning away  COVID-19 patients. State lawmakers last month introduced legislation that would create an independent, bipartisan commission to investigate the deaths. 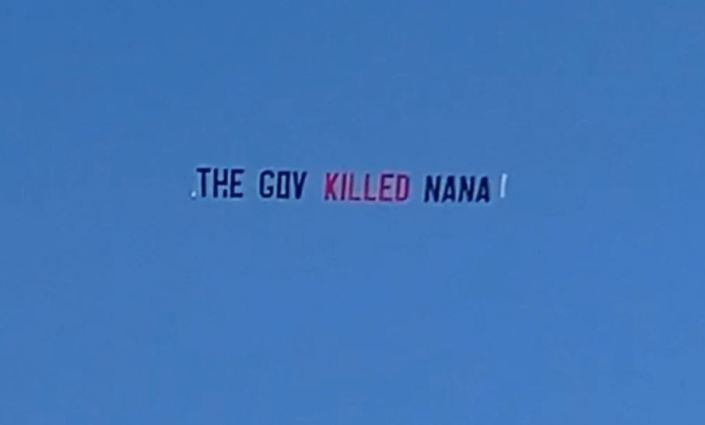