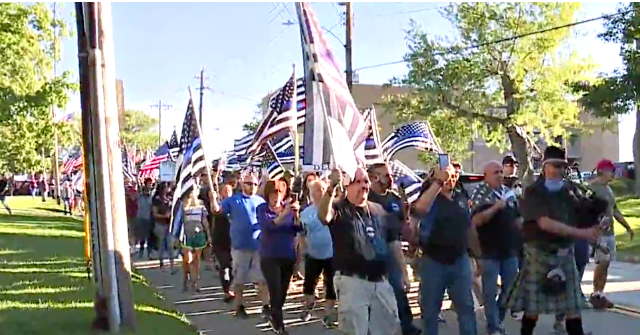 Hundreds of people attended a rally in Ohio on Friday to show support for police and a local football team barred from displaying the Thin Blue Line flag at school events.

“Leading the charge, about a dozen Cleveland police officers and their families, who lost one of their own just 24 hours ago. Detective James Skernivitz, 53, was shot and killed in the line of duty,” according to Fox 8.

The rally was in response to controversy stirred up when several Chardon football players carried a Thin Blue Line flag onto the field during a game last week.

In a statement Monday, Chardon Local Schools Superintendent Michael P. Hanlon, Jr. addressed the issue and said, “this display will not be a part of future pre-game activities at Chardon athletic contests”:

Based on discussions that ensued over the weekend, it does not appear that this action was motivated by racism, rather a show of support for one of our coaches who serves as a police officer, as well as for the first responders in our community who have developed a special relationship with our school and students in the wake of our school tragedy of February 27, 2012. Nevertheless, it is understandable how this could be interpreted as a racially-motivated action and, therefore, not acceptable in a school community.

“I thought it just was really a disrespect to the people who ran into the school to save the teachers and students in 2012,” said Eric Downing, who organized the rally, while thinking about the Chardon police response to the shooting that occurred over eight years ago.

“We’re here to support the police. We need them. We need their protection,” rally participant Chris Styblo told Fox 8.

“The fact that the superintendent stated this was a political move what happened at the game, it’s wrong, it wasn’t a political statement,” Styblo continued.

A moment of silence for Cleveland Police Detective Skernivitz closed out the event on Friday.

“Every day they leave, they kiss their family goodbye, they have no idea if they’re gonna make it back, no idea at all, and how can you not respect them for protecting you?” Downing stated.

A Black Lives Matter counter protest was reportedly scheduled to take place the same time as the rally, but the group canceled it out of respect for the fallen Cleveland detective.