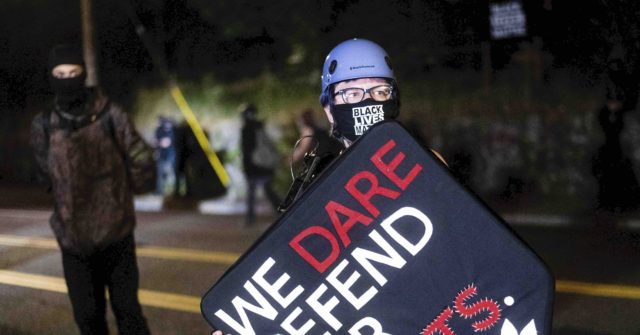 Reinoehl, who identified as “100% ANTIFA,” all but admitted shooting and killing Danielson in an interview with Vice on Thursday.


“A lot of people don’t understand what ‘Antifa’ represents, he explained to Vice. “And if you just look at the basic definition of it, it’s just ‘anti-fascist,’ and I am 100% anti-fascist.

He described the shot that killed Danielson as “the beginning of a war.”

Rioters in Portland reportedly paid homage to Reinoehl after news of his death.

Oregon Live reported on the development:

Michael Forest Reinoehl, sought on a warrant in the fatal weekend shooting of a man in downtown Portland after a pro-Trump rally, was killed Thursday night in Washington as members of a federal fugitive task force tried to take him into custody.

Officers with the U.S. Marshals Service Pacific Northwest Violent Offender Task Force were watching an apartment complex near Lacey where they believed Reinoehl was hiding out, according to the Marshals Service. Portland police had issued a warrant for Reinoehl’s arrest on a murder charge earlier in the day.

Witnesses told The Olympian newspaper that they saw two SUVs pull up and then heard 30 to 50 shots. Two people said they saw Reinoehl begin to fire when he got out of the car. They said officers returned fire.

Reinoehl died at the scene.

Oregon Live reported that four officers discharged their weapons and the encounter will be investigating under a Washington state law that went into effect in January that calls for police from an agency that was not involved to review it.

“Initial reports indicate the suspect produced a firearm, threatening the lives of law enforcement officers,” a Marshals Service spokesperson said in a statement. “Task force members responded to the threat and struck the suspect.”

As Breitbart News reported, Reinoehl said in the Vice News interview that he “no choice” but to shoot Danielson, who he claimed, without evidence, that the Trump supporter was threatening a black person.

“I am confident that my friend and I’m sure I would have been killed because I wasn’t going to stand there and let something happen,” Reinoehl said in the interview.

Reinoehl was cited for having a loaded gun in public in July at a Portland protest, but that charge was later dropped.

He also had other run-ins with the law, including driving while under the influence and endangering another after he was arrested from speeding with his 11-year-old daughter in the car where drugs and an illegal gun were found, according to Oregon Live.

Meanwhile, the Oregon Police Bureau reported on the continuing violence in the city on Thursday that has occurred nightly for more than three months:

A mass gathering blocked East Burnside Street for several hours. People associated with the gathering threw projectiles towards the Penumbra Kelly Building and officers. Some targeted arrests were made and support vehicles used to block vehicular traffic were cited/and or towed.

Police said two arrests were made.