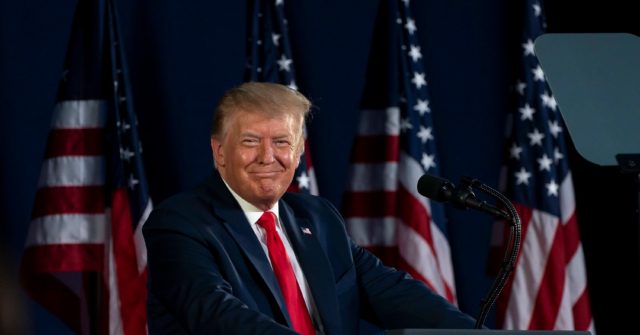 A majority, or 52 percent, of likely voters approve of Trump’s job performance, reflecting a six-point swing in the president’s favor in just one week.

According to the tracking poll, 48 percent disapprove, a four-point decrease from the 52 percent reported Friday, August 28. Former President Barack Obama saw a 48 percent job approval rating at the same point in his presidency in 2012:

Puts him 4 points ahead of Obama at this same point in 2012! https://t.co/1OurNypXZs

The shift is significant, as Trump has not seen a 52 percent job approval since the start of the Chinese coronavirus pandemic, last hitting 52 percent on February 25.

The news comes as the economy rebounds from months of stagnation due to coronavirus-related lockdowns and restrictions. The U.S. economy added 1.37 million jobs in August, beating economist expectations. The unemployment rate clocked in around 8.4 percent.

Trump’s positive job approval also comes as the presidential election swings back in his direction nationwide, making headway in several key battleground states as Joe Biden (D) and the Democrats continue in their attempts to blame civil unrest on President Trump while simultaneously refraining from forcefully condemning Antifa and the brazen acts of lawlessness committed by many of the activists in Democrat-controlled cities such as Portland and Chicago.

The president hit the campaign trail in the swing state of Pennsylvania on Thursday, delivering a speech at an airport in Latrobe, PA. The hypocrisy of his critics remained a topic of conversation, with Trump laying into House Speaker Nancy Pelosi (D-CA) over her salon scandal, calling her a “highly overrated person.”

Notably, the presidential race has dramatically narrowed in key swing states like Pennsylvania.

A Monmouth University Poll released this week showed Biden losing his once-held double-digit advantage in the Keystone State, separated from the president by only four percentage points — a drastic shift from the 13 point lead he held in mid-July.