Once again showcasing the strategic success of the Trump Doctrine: focusing on economic security as a tool for national security – President Vučić of Serbia and Prime Minister Hoti of Kosovo joined President Trump in the oval office today to sign a joint statement of economic cooperation between the two nations. Truly a remarkable accomplishment.

Today, I am pleased to announce yet another historic commitment. Serbia and Kosovo have each committed to economic normalization. After a violent and tragic history and years of failed negotiations, my Administration proposed a new way of bridging the divide. By focusing on job creation and economic growth, the two countries were able to reach a real breakthrough on economic cooperation across a broad range of issues.

We have also made additional progress on reaching peace in the Middle East. Kosovo and Israel have agreed to normalization of ties and the establishment of diplomatic relations. Serbia has committed to opening a commercial office in Jerusalem this month and to move its embassy to Jerusalem by July.

It has taken tremendous bravery by President Vučić of Serbia and Prime Minister Hoti of Kosovo to embark on these talks and to come to Washington to finalize these commitments. By doing so, they have made their countries, the Balkans, and the world safer. I look forward to seeing Serbia and Kosovo prosper as we work together on economic cooperation in the region going forward.

President Trump has been executing a foreign policy, a clear doctrine of sorts, where national security is achieved by leveraging U.S. economic power. It is a fundamental shift in approaching both allies and adversaries; summarized within the oft repeated phrase: “economic security is national security.”

The nature of the Trump foreign policy doctrine, as it has become visible, is to hold manipulative influence agents accountable for regional impact(s); and simultaneously work to stop any corrupted influence from oppressing free expression of national values held by the subservient, dis-empowered, people within the nation being influenced.

There have been clear examples of this doctrine at work. When President Trump first visited the Middle-East he confronted the international audience with a message about dealing with extremist influence agents. President Trump simply said: “drive them out.”

Toward that end, as Qatar was identified as a financier of extremist ideology, President Trump placed the goal of confrontation upon the Gulf Cooperation Council, not the U.S.

The U.S. role was clearly outlined as supporting the confrontation. Saudi Arabia, Kuwait, Egypt, Bahrain and the United Arab Emirates needed to confront the toxic regional influence; the U.S. would support their objective. That’s what happened.

Another example: To confront the extremism creating the turmoil in Afghanistan, President Trump placed the burden of bringing the Taliban to the table of governance upon primary influence agent Pakistan. Here again, with U.S. support. Pakistan is the leading influence agent over the Taliban in Afghanistan; the Trump administration correctly established the responsibility and gives clear expectations for U.S. support.

If Pakistan doesn’t change their influence objective toward a more constructive alignment with a nationally representative Afghanistan government, it is Pakistan who will be held accountable. Again, the correct and effective appropriation of responsibility upon the influence agent who can initiate the solution, Pakistan.

The process of accurate regional assignment of influence comes with disconcerting sunlight. Often these influences are not discussed openly. However, for President Trump the lack of honesty is only a crutch to continue enabling poor actors. This is a consistent theme throughout all of President Trump’s foreign policy engagements.

The European Union is a collective co-dependent enabler to the corrupt influences of Iran. Therefore the assignment of responsibility to change the status is placed upon the EU.

The U.S. will fully support the EU effort, but as seen in the withdrawal from the Iran Deal, the U.S. will not enable growth of toxic behavior. The U.S. stands with the people of Iran, but the U.S. will not support the enabling of Iranian oppression, terrorism and/or dangerous military expansion that will ultimately destabilize the region. Trump holds the EU accountable for influencing change. Again, we see the Trump Doctrine at work.

Perhaps the most obvious application of the Trump Doctrine is found in how the U.S. administration approached the challenging behavior of North Korea. Rather than continuing a decades-long policy of ignoring the influence of China, President Trump directly assigned primary responsibility for a reset to Beijing.

China held, and holds, all influence upon North Korea and has long-treated the DPRK as a proxy province to do the bidding of Beijing’s communist old guard. By directly confronting the influence agent, and admitting openly for the world to see (albeit with jaw-dropping tactical sanction diplomacy) President Trump positioned the U.S. to support a peace objective on the entire Korean peninsula and simultaneously forced China to openly display their closely-guarded influence. 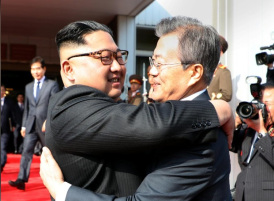 While the Red Dragon -vs- Panda influence dynamic is still ongoing, the benefit of this new and strategic approach has brought the possibility of peace closer than ever in recent history.

No longer is it outlandish to think of North Korea joining with the rest of the world in achieving a better quality of life for its people.

Not only is President Trump openly sharing a willingness to engage in a new and dynamic future for North Korea, but his approach is removing the toxic influences that have held down the possibility for generations. By leveraging China (through economics) to stop manipulating North Korea, President Trump is opening up a door of possibilities for the North Korean people. This is what I mean when I say Trump is providing North Korea with an opportunity to create an authentic version of itself.

♦The commonality in these foreign policy engagements is the strategic placement of responsibility upon the primary influence agent; and a clear understanding upon those nation(s) of influence, that all forward efforts must ultimately provide positive results for people impacted who lack the ability to create positive influence themselves.

One of the reasons President Trump is able to take this approach is specifically because he is beholden to no outside influence himself. It is only from the position of complete independence that accurate assignments based on the underlying truth can be made; and that takes us to the ultimate confrontations – the trillion dollar confrontations.

A U.S. foreign policy that provides the opportunity for fully-realized national authenticity is a paradigm shift amid a world that has grown accustomed to corrupt globalists, bankers and financial elites who have established a business model by dictating terms to national leaders they control and influence. We have our own frame of reference with K-Street lobbyists in Washington DC. Much of President Trump’s global trade reset is based on confronting these multinational influence agents.

When you take the influence of corporate/financial brokers out of foreign policy, all of a sudden those global influence peddlers are worthless. Absent of their ability to provide any benefit, nations no longer purchase these brokered services.

As soon as influence brokers are dispatched, national politicians become accountable to the voices of their citizens. When representing the voices of citizens becomes the primary political driver of national policy, the authentic image of the nation is allowed to surface.

Fortunately we are living in a time of great history, and we have multiple examples surfacing around the world. National elections in Poland, Hungary, Italy, Brazil and right here in the U.S. via Donald Trump highlight responses to dysfunctional multiculturalism and financial influences from corrupt elites within the institutions of globalist advocacy: The International Monetary Fund (IMF), the World Bank, and the World Trade Organization (WTO).

Globalism can only thrive amid a class structure where the elites, though few in number, have more controlling power over the direction of government. It is not accidental the EU has appointed officials and unelected bureaucrats in Brussels as the primary decision-making authority.

As the Trump Doctrine clashes with the European global elite, the withdrawal of the U.S. financial underwriting creates a natural problem. Subsidies are needed to retain multiculturalism.

If a national citizenry has to pay for the indulgent decisions of the influence class, a crisis becomes only a matter of time.

Since the end of World War II the U.S. has been a bottomless treasury for EU subsidy. The payments have been direct and indirect. The indirect have been via U.S. military bases providing security, the NATO alliance, and also by U.S. trade policy permitting one-way tariff systems. Both forms of indirect payment are now being reversed as part of the modern Trump Doctrine.

We are living in historic times….

…to bringing prosperity and peace to the Balkans and the world. I am proud to have assisted these leaders!