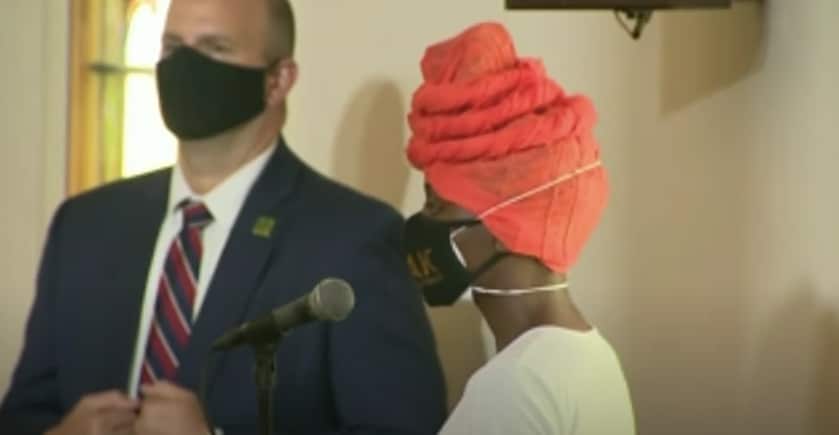 A Kenosha resident spoke frankly about the tensions in her community during a town hall event former Vice President and Democratic presidential nominee Joe Biden hosted for members of the community Thursday after the police shooting of Jacob Blake, who was left partially paralyzed. The resident, Porsche Bennett, said she was “told to go off” a piece of paper during the question and answer session with Biden and the community.

“I’m just going to be honest with you, Mr. Biden,” Bennett explained. “I was told to go off this paper, but I can’t. You need the truth and I am part of the truth.”

She continued, “I was born here, raised here, first eighth-grade class after the school that was named after his mother, so I have to give you the truth of the people and the truth of the matter is we are heavily angry. Not angry as to where ‘oh, they’re protesting,’ there’s a difference between a protestor and a rioter, a very big difference. We protest to get our voices heard, we protest to show that not just Blacks are tired of what’s going on…”

The change that needs to be made in the community “has to be more an effect, she said, adding “but we have yet to see action.” The 31-year-old mother expressed concern about her children’s’ future and the future of her community.

“I speak for the people in this city because I live in this city and I’m out here with these people,” Bennett said. “A lot of people won’t tell the truth, but I’m telling the truth. It’s not what a lot of people think it is for us. We want the same exact rights as others.”

“We want the same treatment… We’re not saying ‘oh, we matter more than anybody.’ None of that, but for so many decades, we’ve been shown we don’t matter. And right now we just want someone who’s just going to show and put that action in.”

She also described the community she’s known for her community, which she’s been an integral member of her whole life. She said the Black community there suffers because of issues like employment racism and gentrification. “It didn’t just start with Jacob,” she stated passionately.