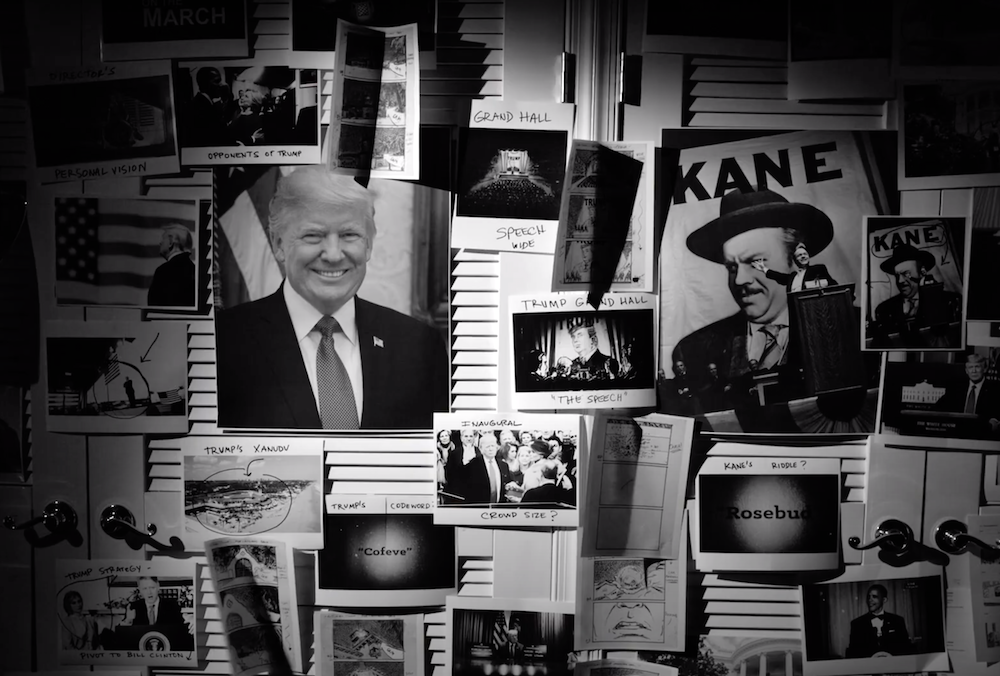 In a culture that follows President Donald Trump’s every move, word, and tweet, few of even his core supporters could name the film he considers most significant. Repeatedly, in separate interviews over the decades, the now-leader of the free world has named 1941 cinematic masterpiece “Citizen Kane” as his favorite movie.

Several observers have noted parallels between Trump’s public persona and the fictional plot: A man of great charisma rises from obscurity into wealth and power, first through popular media, then as a political candidate. Back in 2002, Trump commented on the classic film’s message. “I think you learn in ‘Kane’ that maybe wealth isn’t everything,” he said. “Because he had the wealth, but he didn’t have the happiness.”

On Sept. 7, filmmaker Robert Orlando releases “Citizen Trump,” a feature-length documentary that examines the life and rise of the man who today dominates national politics. “Since my years in film school, I’ve been trained to see nuances in this drama,” said Orlando in a phone interview. “Watching ‘Citizen Kane’ again this spring during the lockdown, it struck me how much the sequencing of this narrative matched up with the rise of Donald Trump.”

Several movies with a political bent have come out recently or are set to be released soon. “Unfit: The Psychology of Donald Trump” intends to rev up the leftist base, while “Trump 2024” and Dinesh D’souza’s “Trump Card” make the case for a second term. By contrast, Orlando’s previous films “The Divine Plan,” about Ronald Reagan’s partnership with Pope John Paul II, and “Silence Patton,” on the legendary World War II general, have sought to present well-rounded stories of true events.

Speaking from his production office in Princeton, New Jersey, writer-director Orlando discussed the purpose of “Citizen Trump” and its relevance to heated election-season debates.

It’s been nearly 80 years since “Citizen Kane” released in theaters. Why is that classic film still praised by film buffs and historians?

Robert Orlando: Fundamentally, “Citizen Kane” is one of the most in-depth, technically precise character studies of a man who rises to power. It achieved something that very few films achieve, exposing a universal archetype regarding the rise and fall of a great man.

During this transition era in American entertainment, films were seen more as escapism than a medium of serious drama, which “Citizen Kane” helped to change. When this film released, Orson Welles had become a top-tier performer on the stage as well as on radio. Trained as one of the top Shakespearean actors, he was uniquely qualified to bring this character to the screen.

When watching it recently, what parallels did you observe between the fictional Charles Foster Kane and Donald Trump?

Orlando: First, Kane is based on real-life media tycoon William Randolph Hearst. During the world wars, his view was that America was going in the wrong direction. Hearst used media to attain power and to influence the opinions of the country.

Both Trump and Hearst came from affluence. They convinced middle America that they were speaking for the forgotten person — right or wrong, I’m not judging. What they did is create a persona of having built their lives from the bottom up. Knowing how to speak to people who’ve had hardscrabble lives involves identifying with them, as Trump did when in construction.

Another parallel is their shared belief in “America First.” Hearst wanted to pull away from foreign entanglements. He hyped the sinking of the USS Maine in his papers because he wanted to bring the country to a hostile perspective of Spain. The modern-day parallel is to China and their misdeeds that Trump has emphasized.

The film goes further into parallels, but one last one: Hearst loved to entertain beautiful people at his estate in San Simeon. He would host top actors like Charlie Chaplin and Errol Flynn, much as Trump has done with stars at Mar-a-Lago. He loves to throw a good party! He wanted to be a movie mogul at one point, though real estate became his moneymaker.

Watching the film, I kept waiting for it to shift. I thought, “This is where it’s going to become a Trump hit piece.” Or, “Now it’s going to be a Trump ad.” But it seemed to stick to facts and let the chips fall where they may. Why did you seek to avoid either extreme?

Orlando: As a filmmaker, I’m just telling a story about a person, warts and all. Why wouldn’t a documentary about real-life events reveal all sides of the narrative? It’s not for me to tell you how to make a political decision about it.

With this film picking up speed, I keep getting versions of this question. Talk show hosts coming from a political perspective are asking, “Are you for or against?” This process has revealed to me how politicized we’ve become. Perhaps because the left has largely taken over Hollywood and the media, the American people are suspicious about everything.

Films are about the common and the universal. You watch “Hamlet” because it’s a study of character that reflects a mirror of who we are. Actually, a famous line from “Hamlet” comes to mind: “I will delve one yard below their mines, and blow them at the moon.” It’s a play on words by the lead, to blow their minds by going underneath their conscious thinking.

A fair presentation is not about being some squish in the middle and having no convictions. Storytellers gain insight from a deeper place, both spiritual and psychological. It’s simply an independent vision that comes from our shared humanity.

Your film brings forward how Trump spent 14 seasons as host of “The Apprentice.” As you researched for this documentary, what did you find he learned during those years?

Orlando: During that time, I believe Trump allowed professional media people to direct him, edit him, and teach him the art of TV. He could not seem to get that right prior to “The Apprentice.”

In the 1980s, he knew how to get in the gossip columns. He knew how to always spin things back to get attention. He knew how to start fires everywhere, so to speak. But it was more random and radical to the point where he found himself, as the film presents, $900 million dollars in debt in Atlantic City. Without “The Apprentice,” that’s where he might have ended.

The rebuilding of his story was partly because Producer Mark Burnett provided direction: “You’re going to stand over there. You’re going to have two people come in the room, and they’re going to play the dynamics off each other. The editors are going to cut certain parts out.”

When he decided to seriously run in summer 2015, reportedly the producers behind “The Apprentice” helped to stage that escalator moment, and some of the show’s talent were involved in the recent convention.

‘Trump Is the Media — and the Biggest Thorn in Their Side’

Your films have often explored faith and morality, and this one doesn’t shy from President Trump’s past broken relationships. What is the message you see in some of those chapters that may be shaded with regret?

Orlando: Today, we often look at things as left and right. But we also look through a lens of simple morality. People tend to want to believe the world is broken up between “all good” and “all bad.” We have a hard time looking at our shadows. But it was FDR who said, “In time of grave danger, [you] walk with the devil until you have crossed the bridge.”

I’ll give you a perfect example. President Trump has the virtue of ambition, which some people don’t see as virtuous. He wanted to be recognized, and he attained the office of the president of the United States. There’s a power in being embraced by people for who you are. Ultimately, he traded up to what he really needed.

Simple morality would say: He did that at the expense of relationships. That’s the loss of innocence Kane faced, isn’t it? The lesson of that line “Rosebud” is that he had all this power, but in the end, he didn’t have what he wanted. It’s a question left open for President Trump. I don’t think anyone knows the answer, but I feel those themes are definitely in play right now.

What do you hope audiences take away from watching “Citizen Trump”?

Orlando: It’s a disruptive film and an indictment of the times we live in — the hyper-real of 24/7 news that has become like reality TV. So if it gets out to enough people, I think the conversation will be hot and interesting and a cacophony of various perspectives.

Because, in Trump, there is a little bit of all of us. Trump is a star. He’s failed. He’s the media, and the biggest thorn in their side. He’s a bit of a blowhard. He’s the two parties — you know, he switched parties seven times. He’s all the things that we are at different levels.

In its best light, I would hope “Citizen Trump” is a catharsis for everyone. I remember one viewer sat there with eyes staring at the screen when it stopped. She said, “Wow, I just lived that whole thing you just showed me.” That’s exactly what I wanted, to show what we’ve been going through. It’s not for me to tell you what to think, but to share the journey with you.