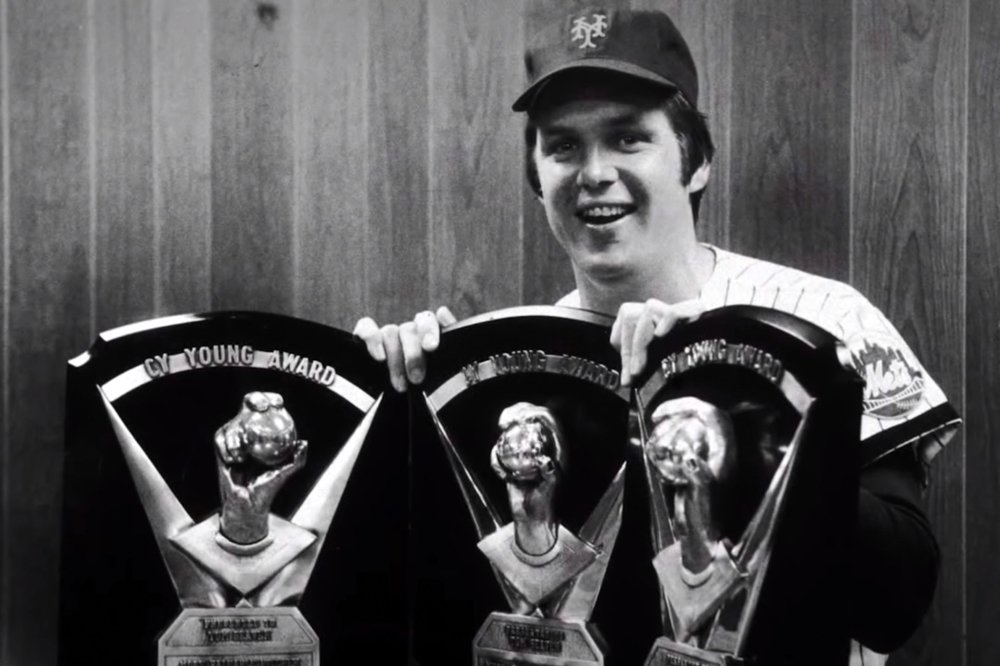 Sports nicknames are rare these days. Back in the day, baseball’s scribes used to thumb through thesauruses in an effort to attach clever monikers to their local favorites. Tom Seaver had two. One of them, “Tom Terrific” is a natural alliteration that could have been applied to any great player with that first name. It was a cartoon in the late ‘50s and Tom Brady tried unsuccessfully to claim it as his own last year. But Seaver’s other handle told the story of his place in New York Mets history in two simple words: The Franchise.

For Mets fans of the late 1960s and early ‘70s, experiencing the team’s first successful seasons, Seaver undoubtedly earned the title, and the story of the Mets simply can’t be told without constantly referencing him. The team he joined in 1967 was coming off of their fifth season, a 66-95 year that earned them ninth place. It wasn’t great, but after spending their first four years in tenth place, it was a sign of improvement.

Mets fans supported their local nine from the beginning. They poured into the new team all of the pent-up baseball love that they would have lavished on the Giants and Dodgers, the two National League franchises that had abandoned the city for sunny California in 1958. In 1962, National League baseball returned in the form of the Mets, a new team that, even down to its orange and blue livery, tried to fuse the traditions of those former rivals into a new hope for New York fans who could not countenance rooting for the Yankees.

It is a strange quirk of baseball history that the struggling New York team found its savior in California, signing the Fresno phenom, Seaver, in 1966. Indeed, they almost missed their chance. The Braves drafted Seaver in January of that year but violated major league rules in doing so. Commissioner William Eckert voided the pick and offered to let any team willing to match the salary offered by the Braves to have a shot at signing Seaver. Three other teams stepped up and Eckert threw their names into a hat.

For once, fate favored the Mets. Seaver went straight to AAA and spent the year in Jacksonville before joining the big club in 1967 at the age of 22. He had the arm and the mindset to pitch successfully; biographer Gene Schoor quotes Jacksonville manager Solly Hemus’s description of Seaver as “a 35-year-old head attached to a 21-year-old body.” The combination worked wonders: he went 16-13 with a 2.76 ERA in 1967 and earned the Rookie of the Year award.

His achievements were a breath of fresh air as the rookie set nearly every pitching record the young franchise had (all of the good ones, anyway: Roger Craig’s record 24 losses in 1962 will, hopefully, probably never be surpassed). Seaver was even better in 1968, and so were the Mets — they won 73 games, their best yet. More importantly, however, they began to assemble the group of young, talented players that would join Seaver in a rise to brilliance. Seaver knew he was good, and the confidence often came off as hauteur in the press, but no one could deny his skill.

For Seaver and New York, 1969 was the magical year. Seaver was the ace of a staff of talented pitchers who began to dominate the National League East. The Cubs were favored to pace the division that year, but the Mets closed a ten-game gap and caught them in September. That season, they never saw second place again and ended up winning 100 games, taking the divisional crown by eight. Seaver earned 25 of those wins, including a one-hitter that was nearly a perfect game. He went 2-1 in the postseason and helped bring the Mets their first, improbable World Series victory. Seaver also took home the Cy Young Award in 1969, the first of three he would earn in his career.

The Mets were the toast of New York as the 1970s began and Seaver was their greatest player. While they never again achieved the heights of that miracle year, the franchise and The Franchise gave the fans plenty to enjoy. Seaver won at least 18 games in each of the next four seasons and, in 1973, the Mets returned to the series in his second Cy Young Award-winning year. They fell to the Athletics in seven games that fall, and 1974 saw the team stumble into fifth place as Seaver suffered from hip and shoulder injuries.

He bounced back in 1975 to win 22 games and his third Cy Young, but the Miracle Mets magic was fading, and the team was on a downward spiral. The dawn of free agency soured relations between the pitcher and the parsimonious team ownership. They fought a proxy war in the newspapers, culminating in the “Midnight Massacre,” a series of salary-dumping trades that included sending Seaver to the Cincinnati Reds.

Seaver had success there, with five straight winning seasons between 1977 and 1981 despite nagging injuries. In 1982, at age 37, Seaver experienced the first truly bad year of his career, but the Mets had new owners who hoped for a reunion with their former ace. The Reds agreed to trade Seaver back to New York in 1983, to the delight of the faithful fans. The team still struggled, though, and while they would soon ascend to baseball’s heights once more, Seaver would not be with them.

He spent the next two-and-a-half seasons with the White Sox, notching his 300th career win in 1985. After an injury-plagued 1986 season divided between Chicago and Boston, he failed to make the Red Sox postseason roster. He was spared, thereby, from having to take part in Boston’s loss to the Mets in the World Series that year, though he was in the clubhouse and witnessed the unlikely win in person.

Seaver attempted one more Mets comeback in 1987 but never made it back to the major league club after struggling in AAA Norfolk. The following year, the Mets retired his number 41, the first Met to receive the honor for his achievements as a player (two managers, Casey Stengel and Gil Hodges, also had retired numbers).

With 311 wins, 3640 strikeouts, three Cy Youngs, and a World Series ring, Seaver’s induction to the Hall of Fame was guaranteed. His share of the vote — 98.84 percent — was the highest ever received at that time. He remains one of only two Mets to be inducted to the Hall as a member of that franchise.

For Mets fans, Seaver’s passing is the melancholy echo of the recent celebration of the 50th anniversary of that miracle 1969 season. Seaver was already suffering from dementia that would eventually end his life, and he took no part in last year’s commemorative festivities. Many players have pitched for the Mets before and after Seaver — 545 in total — but none approaches his dominance and presence on the field and in the clubhouse. The franchise struggles on, but the likes of The Franchise will not be seen again.