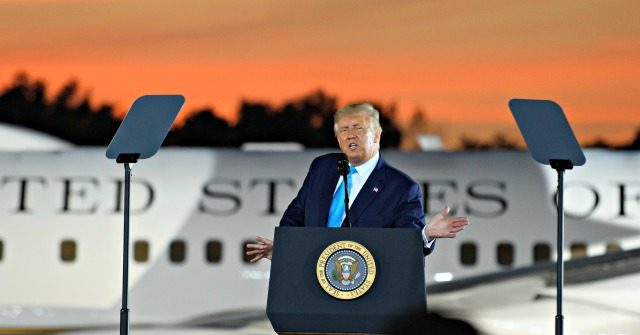 President Donald Trump mocked former Vice President Joe Biden in Pennsylvania for backtracking on his views on fracking as a candidate for president.

“Now, Biden came out today and said, ‘No, no, fracking is ok’ … Because he was getting killed!” Trump marveled, referring to the polls.

The president spoke at an airport rally in Latrobe, Pennsylvania,  Thursday night and said that a fracking ban would cost Pennsylvania anywhere between 600,000 and 940,000 jobs in the state.

Trump recalled that Biden, in a July Democrat presidential primary debate, said that there would be no place in his administration for fossil fuels, coal, and fracking.

“No, we would — we would work it out,” he said. “We would make sure it’s eliminated and no more subsidies for either one of those, either — any fossil fuel.”

But a few months ago he said there would be no place for fracking in a Biden Administration: “we would make sure it’s eliminated.”pic.twitter.com/gLSIZEnwP8

“He said we would make sure that it would be eliminated,” Trump recalled. “Now, he is coming in saying, ‘This is not working too well.’”

The president also referred to a Biden debate moment in December, when he told Politico reporter Tim Alberta that he would be willing to sacrifice jobs in the oil industry to transition to a green economy.

But the former Vice President insisted that he did not want to ban fracking in a speech in Pennsylvania on Wednesday.

Trump boasted that he had ended the “war on fracking” that took place during former President Barack Obama’s administration.