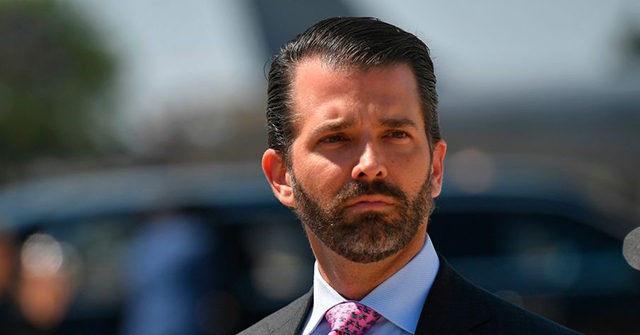 I quote Joe Biden’s own doctor [in my book],” said Trump Jr. “Americans don’t know that this guy’s had two brain aneurysms requiring brain surgery. The chances of being normal after one of those things is not very high. After two, it’s almost impossible.”

Biden “forgets where he is on a daily basis” and often “can’t remember the point that he’s trying to make so often like we saw in the debate when remember I’m oh, you know the thing and I all I don’t want to take any more,” observed Trump Jr.

“If the average American knew that the guy who wants the nuclear football actually has a real cause and effect relationship with mental deficiency, you’d start questioning it,” he said.

Trump Jr. noted news media’s broad refusal to report on Biden’s cognitive decline. “If Donald Trump made a Joe Bidenism, the media would be all over it every day. This guy does it and they’re like, ‘Oh, he’s brilliant.’”

“I don’t mean to make light of mental decline,” continued Trump Jr. “A lot of people know people that deal with these issues. These are really serious things, but we’re going to give this guy the nuclear football? He’s going to get the codes? We’re going to trust him with your 401k and the world’s largest economy and overseeing democracy?”

Biden’s damaged mind allows him to be a puppet of his handlers, warned Trump Jr.

“Joe Biden is simply the camouflage to get those people a position of power,” concluded Trump Jr., describing Biden as a vehicle for Marxist and communist ideology via politicians like Sen. Bernie Sanders (I-VT), Rep. Alexandria Ocasio-Cortez (D-NY), and former Rep. Beto O’Rourke (D-TX).