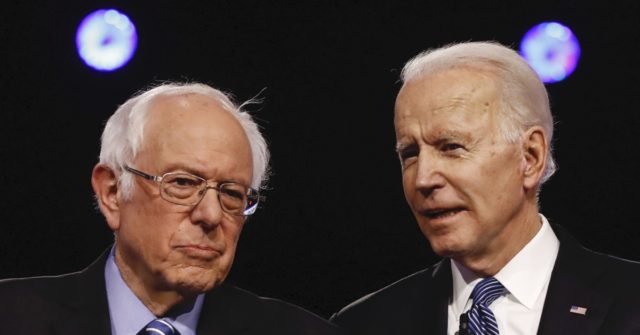 Axios.com published an analysis Friday that concluded former Vice President Joe Biden has shifted decisively to the left, a conclusion that agrees with observations by fellow Democrats, by the Washington Post, and by Breitbart News.

Joe Biden spent a career cultivating the image of a deal-making centrist — and is making this a key selling point for swing voters in 2020. But the modern Biden has been pushed left by his party’s insurgent progressives.

Why it matters: Biden has moved to the left to accommodate party activists on crime, climate, education, immigration and health care. His central challenge with many swing voters: Prove he didn’t move too far, too fast.

Between the lines: Biden wants many suburban voters to associate him with his persona as a white, firehouse Democrat — over a more woke 2020 Democratic primary candidate who navigated through his rivals to win his party’s nomination.

Flashback: Biden’s platforms and record shows how he has changed.

The article analyzes several of Biden’s policy flip-flops, omitting his shift on abortion. Biden once opposed the use of federal taxpayer dollars to fund abortions; he changed his mind last year, and now backs the Planned Parenthood position fully.

In July, Breitbart News noted that there were few differences remaining between Biden and socialist rival Sen. Bernie Sanders (I-VT):

Not only does the Biden-Sanders “Unity” Platform propose many of the same ideas Sanders campaigned on — even lifting language directly from the Sanders website — but Biden himself has begun using the same radical left-wing buzzwords that Sanders used in his campaign stump speeches.

The Washington Post noted the change in June, noting that Biden had once promised “nothing would fundamentally change” and said the country was “looking for results, not a revolution,” but had since completely changed his tone.

Sanders himself has denied that Biden has become a socialist: “If only,” he said in an email to supporters last month.