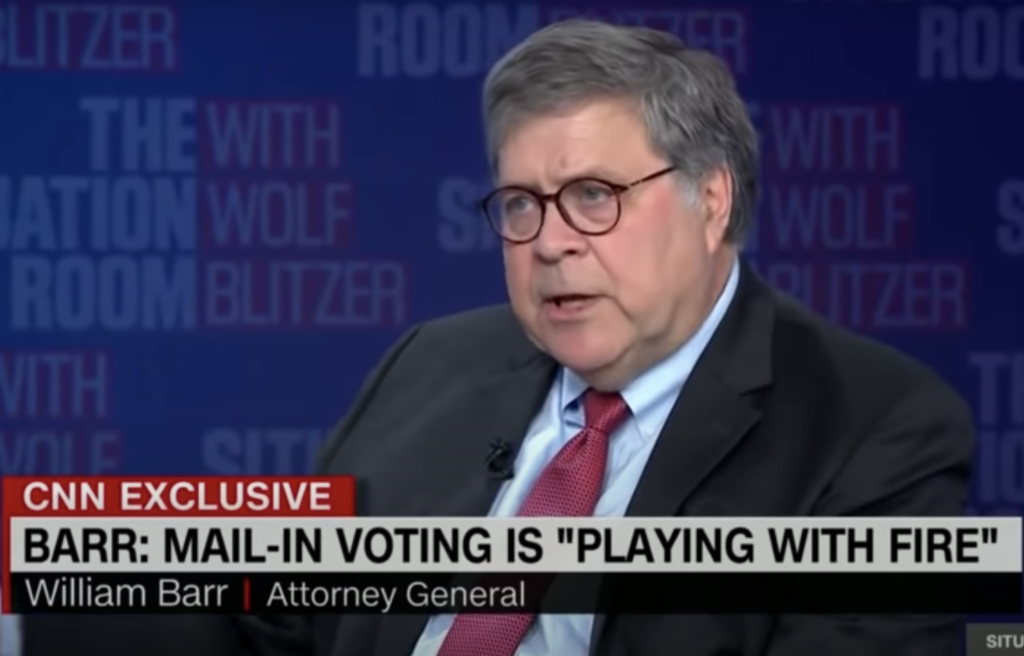 Attorney General William Barr said in a CNN interview Wednesday that mass mail-in voting is a “reckless and dangerous” method, and the people advocating for it are “playing with fire.”

“We’re a very closely divided country here, and people have to have confidence in the legitimacy of the government,” he said. “People trying to change the rules to this methodology, which as a matter of logic is very open to fraud and coercion, is reckless and dangerous, and people are playing with fire.”

The interview with CNN’s Wolf Blitzer covered a wide range of topics from Jacob Blake, treason accusations, systemic racism, and voting. Barr explained that the risks of voter fraud, coercion, and other vulnerabilities with mail-in ballots are too high to implement on a national basis.

While he believes absentee voting is acceptable because it requires a request to a specific address, Barr argued that there are multiple instances of mass mail-in ballots going wrong. He even offered examples, telling the story of one Texan man that indicted by the Attorney General’s office for marking his preferred candidate on 1,700 ballots.

What we’re talking about is mailing them to everyone on the voter list when everyone knows those voter lists are inaccurate. People who should get them, don’t get them, which is what has been one of the major complaints in states that have tried this in municipal elections. And people who get them are not the right people. They’re people who have replaced the previous occupant and they can make them out. Sometimes multiple ballots come to the same address with a whole several generations of occupants. You think that’s a way to run a vote?

Barr also fired back at Blitzer’s comments that these examples were merely individual instances of fraud, and not widespread.

“We haven’t had the kind of widespread use of mailing ballots is being proposed,” Barr said, indicating that a mass mail-voting campaign might increase these instances.

In response to allegations that President Donald Trump encouraged voters to test the voting system by attempting to vote twice, Barr suggested that Trump’s comments point to the flaws in the voting system which makes it susceptible to potential fraud.

“It seems to me what he’s saying is he’s trying to make the point that the ability to monitor this system is not good and if it was so good, if you tried to vote a second time you would be caught if you voted in person,” Barr said. “This is a sort of cheap talk to get around the fundamental problem.”

While the rest of the interview with Blitzer was mostly straightforward, the host interrupted at one point, to which Barr responded with “let me talk.”

Barr also laughed when Blitzer asserted that CNN is “fair and balanced” after Barr claimed that the media lies about many different things.

“The media should be fair and balanced no matter who the president is,” Barr argued. “[It] doesn’t give the media license to lie the way a lot of the media is.”