Last night the FBI interview notes (known as a “302 report”) with Maltese Professor Joseph Mifsud were released. The story of Mr. Mifsud and his discussions with former Trump campaign aid George Papadopoulos was said to be the originating seed for the FBI to investigate the Trump campaign contacts with Russia known as “Crossfire Hurricane”.

A narrative, pushed through a series of FBI leaks in 2017 outlining Mifsud as a Russian entity, was at the center of how the media justified the FBI targeting the Trump campaign for colluding with Russia. Later the special counsel used FBI conversations with Papadopoulos to claim he was less than honest about his contacts with Mifsud.

However, the actual FBI interview notes with Mifsud on February 10, 2017, show a remarkably different story. 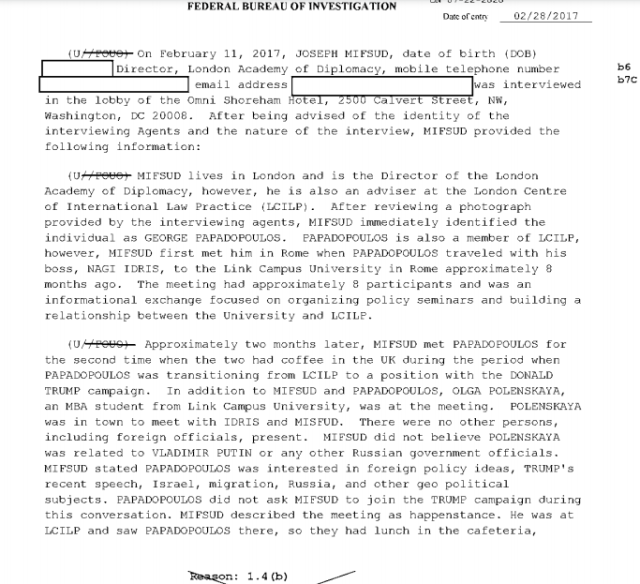 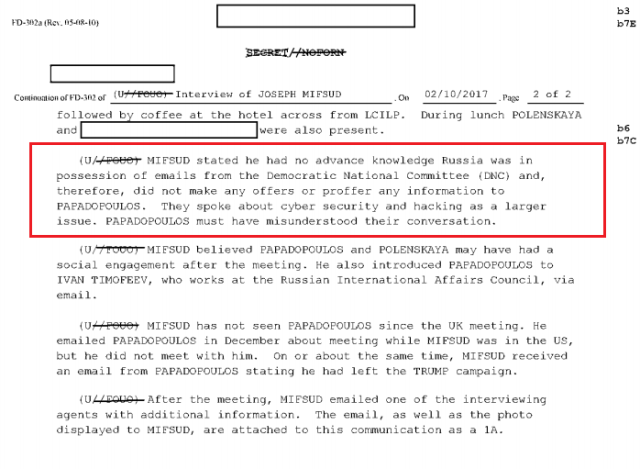 As noted above the FBI interview of Mifsud was not very probing; and interestingly the agents did not ask may questions -or followups- about statements made by Mifsud.  This is particularly interesting when you recognize the claimed conversation between Mifsud and Papadopoulos about Russia hacking DNC/Clinton emails was said to be the epicenter of the entire FBI operation. “Russians having dirt on Clinton” etc.

New York Times – “In late April, at a London hotel, Mr. Mifsud told Mr. Papadopoulos that he had just learned from high-level Russian officials in Moscow that the Russians had “dirt” on Mrs. Clinton in the form of “thousands of emails,” according to court documents.”

Joseph Mifsud directly refutes any conversation about that important DNC/Clinton email factor, and in February 2017 the FBI agents did not ask a single clarifying question in that regard.  Note: this interview is happening seven months after the July 31, 2016, origination of the investigation.

The follow-up email from Mifsud (noted in the FBI interview notes) was previously provided to House Oversight and Government Reform committee, and is below: 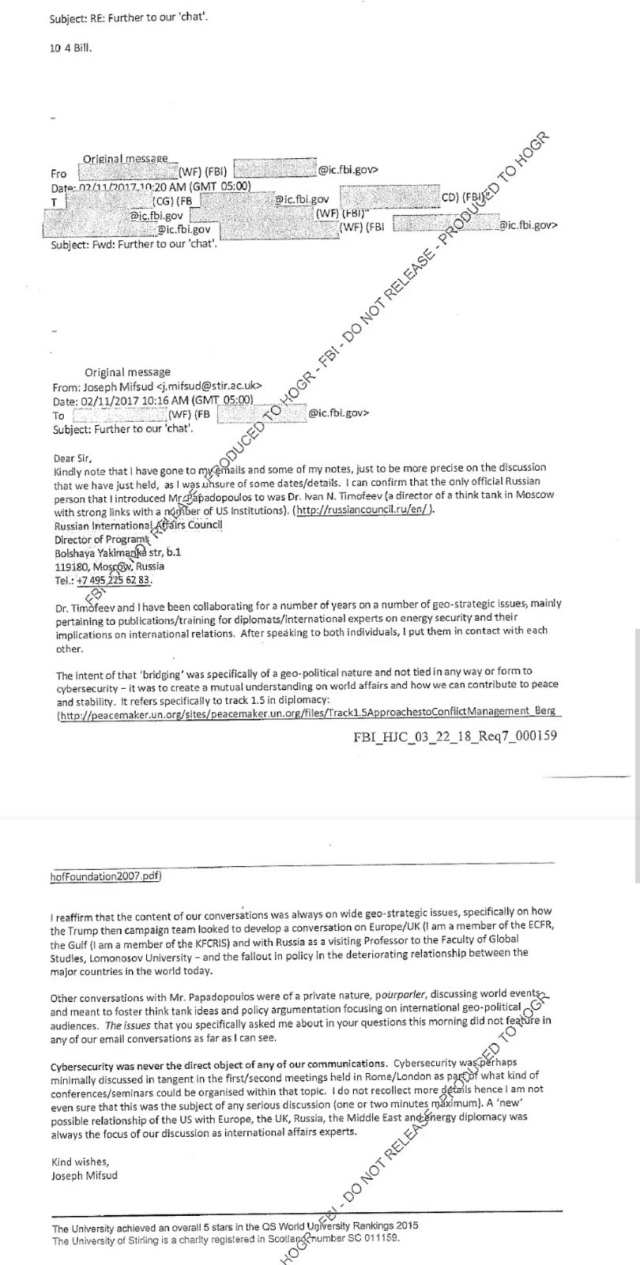 The release of the Mifsud interview notes highlights the casual lack of importance the FBI seemed to be placing on the Russian “hacking” of the DNC or Clinton emails.  Additionally, there is absolutely no evidence the FBI considered Mifsud a “Russian asset” as outlined by former FBI Director James Comey.  Indeed the entire thing just gets more sketchy.

This FBI interview with Mifsud appears to be more of an approach at justifying a pre-existing investigation.  Perhaps best viewed as a ‘going-through-the-paces’ approach to defend the thin gruel pretense for the Trump surveillance of the prior year.

The FBI based the legality and justification of their Trump campaign investigation on a rumor of a conversation shared by Australian Ambassador Alexander Downer as he recalled George Papadopoulos referencing this contact with Mifsud.  The information from Downer came through unofficial channels connected to the State Department and was passed along to the FBI.

From the casual lack of inquiry it appears s the FBI interviewers knew the origination story was very thin and did not want to add aspects that would undermine the original justification.  Instead, they eventually handed the entire mess over to the special counsel where Andrew Weissmann and crew used these thin threads to piece together a fabrication that would advance the political opposition to President Trump.

Our own research has noted the Weissmann special counsel operation was actually far more corrupt than the original FBI and DOJ effort that preceded it.  Overall the Trump-Russia investigation was one long fraudulent investigative continuum, with multiple attack angles; however, it was the special counsel that took it to new levels of fraud, manipulation and purposeful narrative assembly.

Charles Hurt: Revealed: The Answer to The Pandemic Is the American Individual

Mother, Stepfather Arrested In Connection With 4-Year-Old’s Death In California