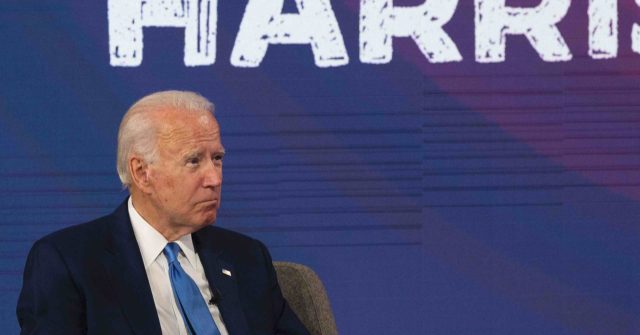 Former Vice President Joe Biden suggested Wednesday that the victim of a shooting in Portland, Oregon, was killed because he and other pro-Trump demonstrators had been “inciting responses.”

Biden, offering a rare opportunity to the press to ask him questions, was asked whether he agreed with his running mate, Sen. Kamala Harris (D-CA), that the police officer who shot Jacob Blake in Kenosha, Wisconsin, should be criminally charged, and also whether he thought the officers involved in the death of Breonna Taylor in Louisville, Kentucky, should be charged.

Biden said, “I think we should let the judicial system work its way.”

He then volunteered the following about Portland:

I might add, by the way, I think what happened in Portland, where a — one of the Trump guys riding along in vans, inciting responses, shooting rubber bullets, I guess, or paintballs, apparently there was someone shot by someone in the crowd, with a bullet. Killed. I think that person should meet the legal requirements, whatever that calls for, be investigated, and it should follow through on what needs to be done. Let the judicial system work. Let’s make sure justice is done.

The victim, Aaron “Jay” Danielson, was killed after the pro-Trump caravan was over, as he was walking down the street. The reported suspect, Michael Forest Reinoehl, is a supporter of Black Lives Matter and Antifa, according to the Oregonian.

The confrontation with paintballs — fired, apparently, by both sides, among other projectiles — happened earlier, as part of the pro-Trump caravan drove through downtown Portland.

It is possible Danielson was firing paintballs, though there is not yet evidence of that — though a companion had paintballs, according to the New York Times.

Regardless, Danielson was not killed during a confrontation between the two groups.

The Times described the moment of the shooting, based on video evidence:

The man in white and another man dressed in black can be seen crossing the street, apparently to confront Mr. Danielson and Mr. Pappas.

There is shouting that is hard to hear on Mr. Dunlap’s livestream, but in a second video filmed by Nathan Millsap, a Portland videographer, the audio is clearer.

A man, who Mr. Pappas later contends is the gunman, shouts: “Hey, we got some right here. We got a couple right here.”

Another man says, “He’s macing you, he’s pulling it out.”

The sound of spraying is audible, followed immediately by two gunshots.

Mr. Dunlap captures the shooting on his livestream. Mr. Danielson can be seen raising his arm and beginning to spray a pepper spray-like substance, followed almost immediately by the gunshots. The man in white backs away with his arm raised and then runs, along with the man dressed in black.

There is no evidence of “incitement.”

Earlier this week, Biden said pro-Trump protesters had gone “spoiling for a fight,” but did not explicitly go as far as saying the victim of the shooting bore responsibility for his own death by inciting the left-wing protesters.