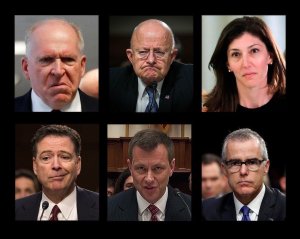 Two days ago Brennan told the “small group” of politicians and corrupt Obama officials what his official line to those Durham investigators was.

Brennan tells his allies this through an Op-Ed published in the Washington Post.

The motive, intent and purpose is the same as Dianne Feinstein’s leak of the Glenn Simpson testimony… get all messaging on the same page.

Here’s the Brennan narrative to assist the “by the book” justification:

[Washington Post – John Brennan] – […] President Barack Obama already knew the Russians were hacking into the networks of U.S. presidential campaigns, but on the afternoon of July 28, 2016, I informed him in a hurriedly scheduled meeting that Russian President Vladimir Putin had authorized his intelligence services to carry out activities to hurt Democratic candidate Hillary Clinton and boost the election prospects of Donald Trump.

“Mr. President,” I said, “it appears that the Russian effort to undermine the integrity of the November election is much more intense, determined, and insidious than any we have seen before.”

My reference to the unprecedented scale and scope of Moscow’s efforts to harm the integrity of the election quickly riveted the president’s attention. It also triggered the immediate concern of the others in the room — including Chief of Staff Denis McDonough, who asked, after I was done speaking, “What are you planning to do on the congressional front?”

I thought for a brief moment and then recommended that the most sensitive intelligence be limited initially only to the “Gang of Eight” — the bipartisan leadership of both houses of Congress as well as the chairs and ranking minority-party members of the Intelligence Committees. I was concerned that briefing Congress more broadly on fragile intelligence sources and methods could lead to damaging leaks, harming our ability to learn more about Russian plans and capabilities.

Moreover, some U.S. persons affiliated with the Trump campaign appeared to be caught up, wittingly or unwittingly, in the Russian scheme, and I knew that the politically volatile nature of such information could have been used by Democrats to harm the Trump campaign.

In my more than 30 years of government service, I had witnessed some members of both political parties engage in unethical behavior by misusing intelligence, and I wanted to avoid that happening on the eve of a closely contested presidential election. Obama understood my concerns, but he said he wanted Congress briefed as appropriate and as required.

Congress was already on summer recess at the time, but three members of the Gang of Eight — Democrats Rep. Nancy Pelosi (Calif.), Rep. Adam B. Schiff (Calif.) and Sen. Harry M. Reid (Nev.) — made arrangements to receive the briefing in August in person or by secure phone. The other five — one Democrat and four Republicans — were briefed individually in secure congressional conference rooms on Sept. 6.

To underscore the sensitivity of the intelligence, I personally conducted all the briefings. Most of the eight immediately recognized the gravity of Russian efforts. A notable exception was Sen. Mitch McConnell (R-Ky.), who insinuated that the CIA was working with the Obama administration to prevent Trump from getting elected.

We conducted many subsequent briefings for members and staff in the run-up to the Nov. 8 presidential election.  (more)

Smart move by Brennan to bring in President Obama; although this is the first time Brennan admits to briefing the White House on the Steele Dossier information specifically on July 28th 2016.  Not accidentally three days before the official opening of FBI operation Crossfire Hurricane.

Yes, that timeline contradicts with other information provided by Lisa Page and various FBI officials in their depositions, but that can be reconciled internally, safely, based on obtuse distinctions around the actual content of the briefing itself.

Start by remembering the sworn testimony of John Brennan to congress on May 23rd, 2017.  Listen carefully to the opening statement from former the former CIA director and pay close attention to the segment at 13:35 of this video [transcribed below]:

Brennan: [13:35] “Third, through the so-called Gang-of-Eight process we kept congress apprised of these issues as we identified them.”

“Again, in consultation with the White House, I PERSONALLY briefed the full details of our understanding of Russian attempts to interfere in the election to congressional leadership; specifically: Senators Harry Reid, Mitch McConnell, Dianne Feinstein and Richard Burr; and to representatives Paul Ryan, Nancy Pelosi, Devin Nunes and Adam Schiff between 11th August and 6th September [2016], I provided the same briefing to each of the gang of eight members.”

“Given the highly sensitive nature of what was an active counter-intelligence case [that means the FBI], involving an ongoing Russian effort, to interfere in our presidential election, the full details of what we knew at the time were shared only with those members of congress; each of whom was accompanied by one senior staff member.”…

Notice a few things from this testimony.  First, where Brennan says “in consultation with the White House“.  This was the first direct connection between Brennan’s activity and President Obama, National Security Adviser Susan Rice and Chief-of-Staff Denis McDonough, each of whom would have held knowledge of what Brennan was briefing to the Go8; Brennan confirms this in his August 31, 2020, Op-ed.

Secondly, Brennan is describing raw intelligence (obviously gathered prior to the Carter Page FISA Application/Warrant – October 21st, 2016) that he went on to brief the Gang-of-Eight (pictured below).  Notice Brennan said he did briefings “individually”. 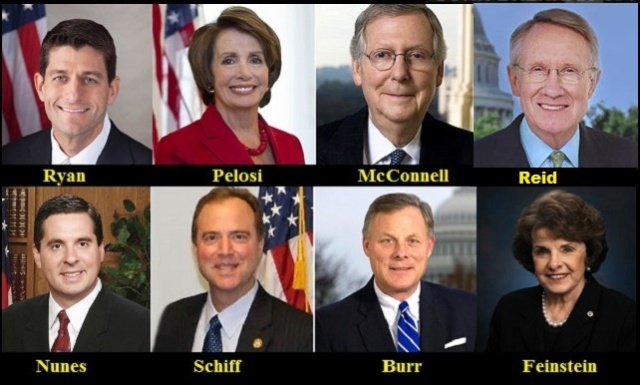 Brennan also says in his testimony that he began the briefings on August 11th, 2016.  This is a key point because former Senate Minority Leader Harry Reid sent a letter to James Comey on August 27th, 2016, as an outcome of his briefing by John Brennan. But it is the content of Reid’s letter that really matters.

In the last paragraph of Reid’s letter to Comey he notes something that is only cited within the Christopher Steele Dossier [full letter pdf here]: 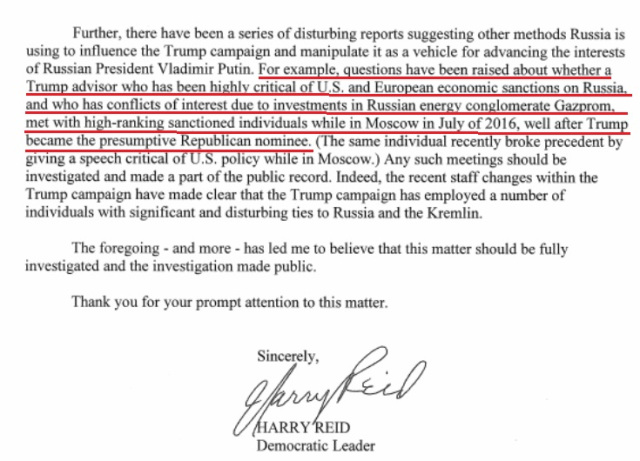 This letter is August 27th, 2016.  The Trump advisor in the letter is Carter Page. The source of the information is Christopher Steele in his dossier. Two months later (October 21st, 2016) the FBI filed a FISA application against Carter Page using the Steele Dossier.

So what we are seeing here is CIA Director John Brennan briefing Harry Reid on the Steele dossier in August 2016, even before the dossier reached the FBI.  However, John Brennan has denied seeing the dossier until December of 2016.  A transparent lie.