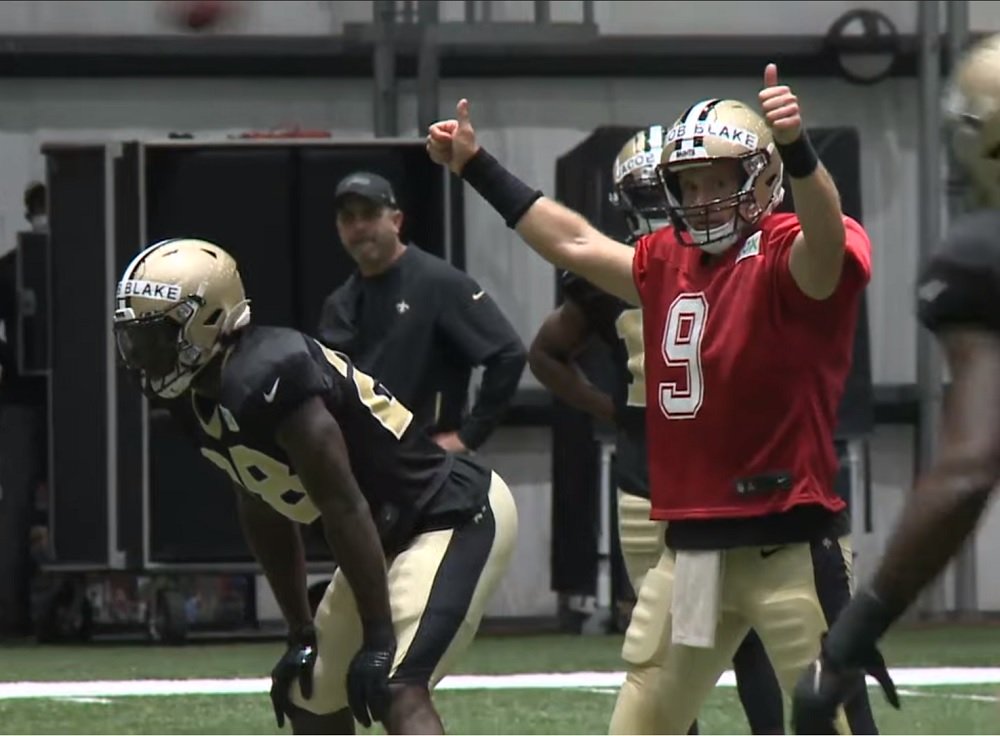 Last Friday, New Orleans Saints quarterback Drew Brees and his team broke with the pack to hold practice as nine other NFL teams cancelled theirs in the wake of the police shooting of Jacob Blake. They put Blake’s name in big black letters across the front of their helmets in what Sporstcasting.com writer Stephen Sheehan called “a powerful visual signal.”

New Orleans Saints coach Sean Payton explained after practice that, “The idea of putting his name on everyone’s helmet was something we felt would be appropriate and they were for it.”

If Blake were an innocent family man who just happened to twitch during a tense encounter with police, this would all seem perfectly appropriate. There’s just one problem: not only was Blake aggressively resisting arrest in the incident that’s left him paralyzed, he had a warrant out for his arrest due to a charge of sexual assault.

According to research by The New York Post, Blake was forbidden from being at the Kenosha home where he was shot because of an incident at the same residence on May 3, for which there was an open warrant for his arrest. Based on police records, The New York Post describes the alleged assault:

The victim, who is only identified by her initials in the paperwork, told police she was asleep in bed with one of her children when Blake came into the room around 6 a.m. and allegedly said ‘I want my sh-t,’ the record states.

She told cops Blake then used his finger to sexually assault her, sniffed it and said, ‘Smells like you’ve been with other men,’ the criminal complaint alleges.

According to the complaint, Blake then stole the keys from the woman’s purse and took her car, at which point she called 911. According to her report, about twice a year when he had been drinking heavily, Blake would come around and physically assault her.

Now, it could be that Brees and his teammates hadn’t seen this story break when they headed out for practice, as the New York Post published this information that same day. Yet it’s been five days now, and Brees has still not apologized for lionizing a man who, by the same standard corporate media has applied to other individuals, Blake is a credibly accused sexual assailant, trespasser, and car thief.

Now, I’m pretty sure that even before Me Too dominated headlines for months, everybody thought sexual assault was a pretty big deal. Even if you leave aside the facts about the shooting, which are damning enough, the Me Too movement makes the left’s view of Blake as a pure-hearted victim of police brutality grossly hypocritical and worthy of deepest scorn.

By the Me Too standard, even catcalling is considered to be a form of violence, but that’s not the standard being applied to Blake. If a Republican congressman had been accused of Blake’s actions in a police report by someone who had no apparent ulterior motive, the media would have permanently destroyed his career and reputation. They would have called the police heroes for protecting a woman and her children from what could have been another assault or kidnapping. Instead, they breathlessly covered the fact Blake was temporarily chained to his hospital bed in the aftermath of his fight with police as if it were some colossal injustice without apparently bothering to investigate why that might be the case.

Ever since the Access Hollywood audio surfaced of Donald Trump saying he grabbed women by the [expletive], and that “when you’re a star, they let you do it,” the media have generated a barrage of condemnation any time a Republican strays into indecency or worse. Remember the outrage over alleged predator of teenagers and Senate candidate Roy Moore? Remember the all-out attack on then-Supreme Court nominee Brett Kavanaugh based on the word of one woman 30 years after the alleged rape—and when that wasn’t enough, airing a completely uncredible, fabricated account of a “gang rape” party where he was supposedly present, all to force him to withdraw his nomination?

Me Too was supposed to be a wake-up call to the world that sexual assault or leveraging power to manipulate women into sexual acts was absolutely unacceptable. Yet now, in 2020, an entire NFL team not only refuses to give up a myth about what happened (as the St. Louis Rams did when they performed their “hands up don’t shoot” virtue signal after Michael Brown’s death), but put the name of an alleged rapist on their helmets to show “respect, ”either knowingly, or because they felt virtue signaling was more important than waiting for important facts to come out about Blake’s character.

Brees caved once to massive pressure against his comments disapproving of kneeling to protest the flag. Instead of learning that the mob will drag you further and further into their radicalism if you submit, he gave in fully. Maybe this experience will serve as a lesson to him: that the left will go to any length to control people, up to and including making an instant martyr out of a man before doing any fact checking about who he was—and downplaying those facts when they do.

CBS’s profile of Blake puts the “previous accusation of sexual assault” in a brief two sentences near the bottom of the article. A lengthy New York Times article weaving in details of both the Blake shooting and the related Kyle Rittenhouse shooting didn’t mention the alleged assault at all. CNN likewise buries it in their coverage with a single sentence devoid of detail.

Blake’s GoFundMe page has now raised more than $2.1 million. Sympathizers with Black Lives Matter’s push to empty prisons looked the other way while thousands of criminals who were turned loose on the streets over COVID proceeded to prey upon the innocent. Amid strong pushes to defund the police and extensive cover for rioters and looters, don’t expect the left to give up their double-standard on violent offenders. The narrative will change faster than you can say “Me Too,” and if people who care about protecting the vulnerable so much as blink, they’ll get away with it.

If Brees and the Saints do care about women and children’s safety, they should apologize to their fans for lionizing a credibly accused rapist.