If you read the New York Times Tuesday morning, you’d think the United States has fallen by the wayside in its fight against the novel Wuhan coronavirus, faring no better in the global pandemic against the invisible enemy than allied nations in the developed world.

In his Tuesday morning briefing, Times writer David Leonhardt kicked off September with a comparative analysis of the United States’ pandemic standing relative to other developed nation’s outlining what he deems “America’s Death Gap.”

“Here’s a jarring thought experiment,” Leonhardt explains. “If the United States had done merely an average job of fighting the coronavirus – if the U.S. accounted for the same share of virus deaths as it did global population – how many fewer Americans would have died? The answer: about 145,000.”

Considering just more than 183,000 have succumbed to the disease, that’s a jarring number to indict the White House with less than 65 days from the election.

“No other country looks as bad by this measure,” Leonhardt wrote. “The U.S. accounts for 4 percent of the world’s population, and for 22 percent of confirmed Covid-19 deaths. It is one of the many signs that the Trump administration has done a poorer job of controlling the virus than dozens of other governments around the world.”

It’s a harrowing tale but it isn’t true.

While the United States is by no means a top-tier nation in its pandemic performance, thanks to crisis outbreaks in the densely populated tri-state area around New York City which calls home to more than half of the country’s COVID-19 fatalities, the developed nations presented by the Times as model societies far more triumphant against the virus than the U.S. are in reality no more successful when considering critical context conveniently omitted by the legacy paper. 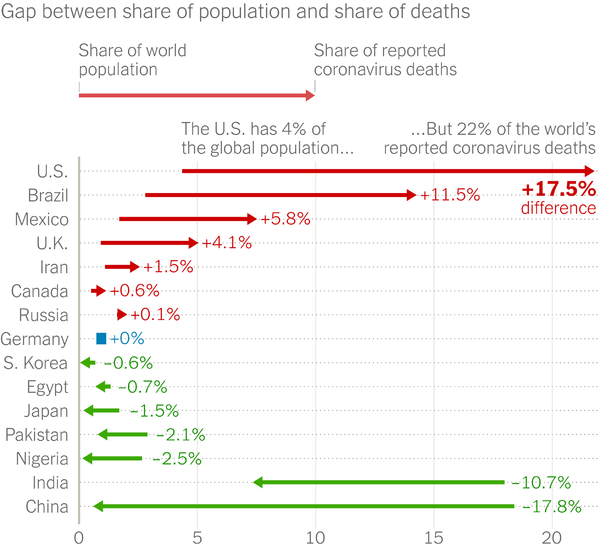 A more thorough analysis put forward by Avik Roy of the Foundation for Research on Equal Opportunity (FREOPP) however, reveals a different story overlooked by the Times and the rest of the corporate media running a preconceived narrative.

To chart a more comprehensive global performance, Roy analyzed “Excess Deaths,” to measure pandemic fatalities across nations which often vary in what they determine a death from the novel virus. The German death tally for instance, includes only individuals in care homes who died but also tested positive for COVID-19. In Belgium, deaths include any individuals who doctors suspect came in part as a result from coronavirus infection, without a conclusive test. A vast majority of the deaths in the United States meanwhile, involved co-morbidities contributing to lethal complications form the virus.

Excess deaths is the measured number of fatalities suffered under the pandemic than previously expected based on previous years’ data. While excess deaths don’t distinguish between those who died from coronavirus versus those who died from the lockdowns either by suicide, missed screenings over fear of hospitals, another lockdown-induced trauma, the metric still remains far more reliable for a comparative measure given the variability in how nations score their own death tallies from COVID-19. The Centers for Disease Control (CDC) has even been shown inflating the U.S.’s COVID-19 fatality numbers by declaring nearly anything and everything linked to the virus a death form COVID-19. 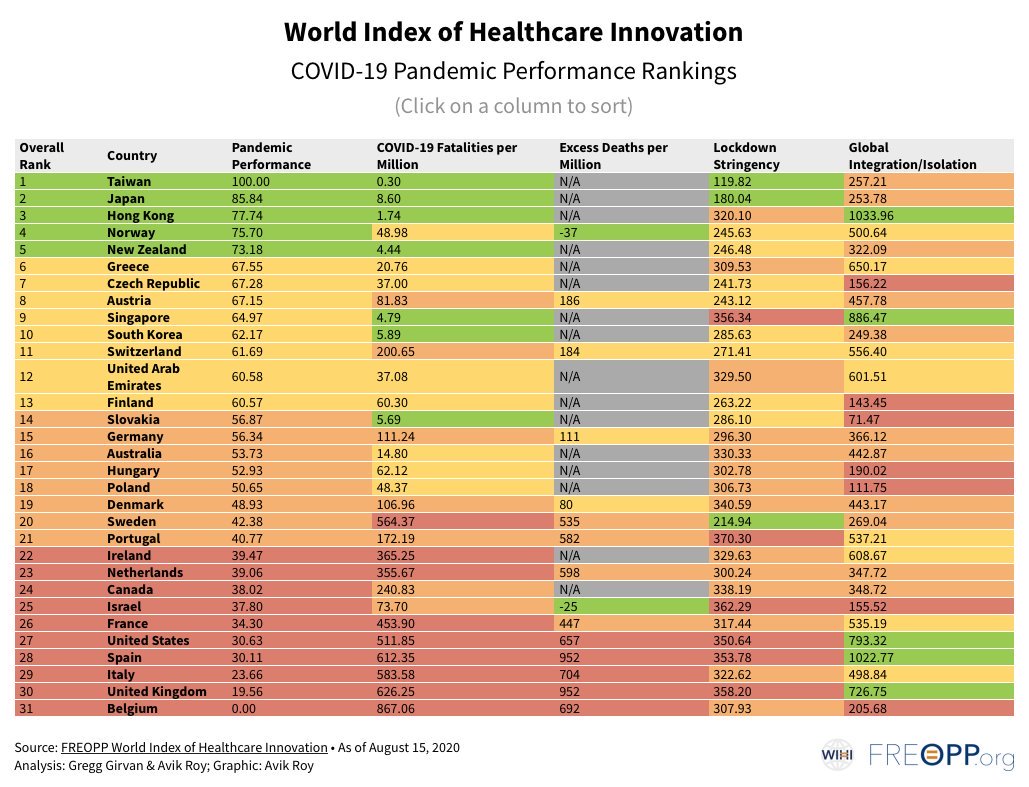 Roy has also ranked each country’s performance on a scale of several other metrics including the extremities of lockdowns and their global integration to take widespread travel into account. When combining those factors, the U.S. remains on par with France, Israel, Canada, Netherlands, and Ireland.

Of the countries that report excess deaths, quite a few are in the U.S.’s ballpark, including France, Sweden, Portugal, Netherlands, Belgium, Italy, Spain, UK. The last 4 are somewhat higher than the U.S., the first 4 somewhat lower. Norway and Israel stand out as top performers.

Another takeaway from the chart shows how the stringency of lockdowns appeared to have somewhat of a reverse affect on pandemic performance, indicating that stricter lockdowns might have led to more deaths than from the virus itself. Taiwan and Japan are shown to have the two most lenient lockdown measures in place and yet rank the highest in the global leadership board combating the virus. Nations with some of the strictest lockdowns meanwhile, have ranked near the bottom with the heaviest pandemic death toll.

Size and population even still matters, considering that the United States would rank much higher on the chart if not for the tri-state area inflating its numbers, which also saw the strictest lockdowns imposed of the entire country.