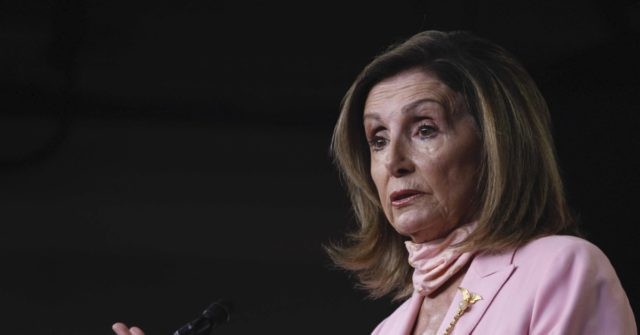 Speaker of the House Nancy Pelosi (D-CA) admitted Tuesday evening that she had gone to a hair salon in San Francisco that was closed under coronavirus restrictions, but claimed she did not know it was wrong, blaming the business for the violation.

As Breitbart News reported earlier Tuesday, Fox News released security camera footage of Pelosi having her hair done even though salons in the city remained under lockdown.

In security footage obtained by Fox News, and timestamped Monday at 3:08 p.m. Pacific Time, the California powerhouse is seen walking through eSalon in San Francisco with wet hair, and without a mask over her mouth or nose.

The stylist doing her hair can be seen following her wearing a black face mask.

Salons in San Francisco had been closed since March and were only notified they could reopen on Sept. 1 for outdoor hairstyling services only.

“The Speaker always wears a mask and complies with local COVID requirements. This business offered for the Speaker to come in on Monday and told her they were allowed by the city to have one customer at a time in the business. The Speaker complied with the rules as presented to her by this establishment.”

The business owner told Fox News that an independent stylist who rents a chair at the salon said that Pelosi’s assistant had sent a message asking for an appointment.

The owner was outraged, calling Pelosi’s actions “a slap in the face.” She said she had received a Paycheck Protection Program (PPP) loan but had been prevented from re-opening by local regulations.

Biden: ‘A Year From Now,’ ‘Significantly Fewer People’ Will Have to Distance, Wear a Mask