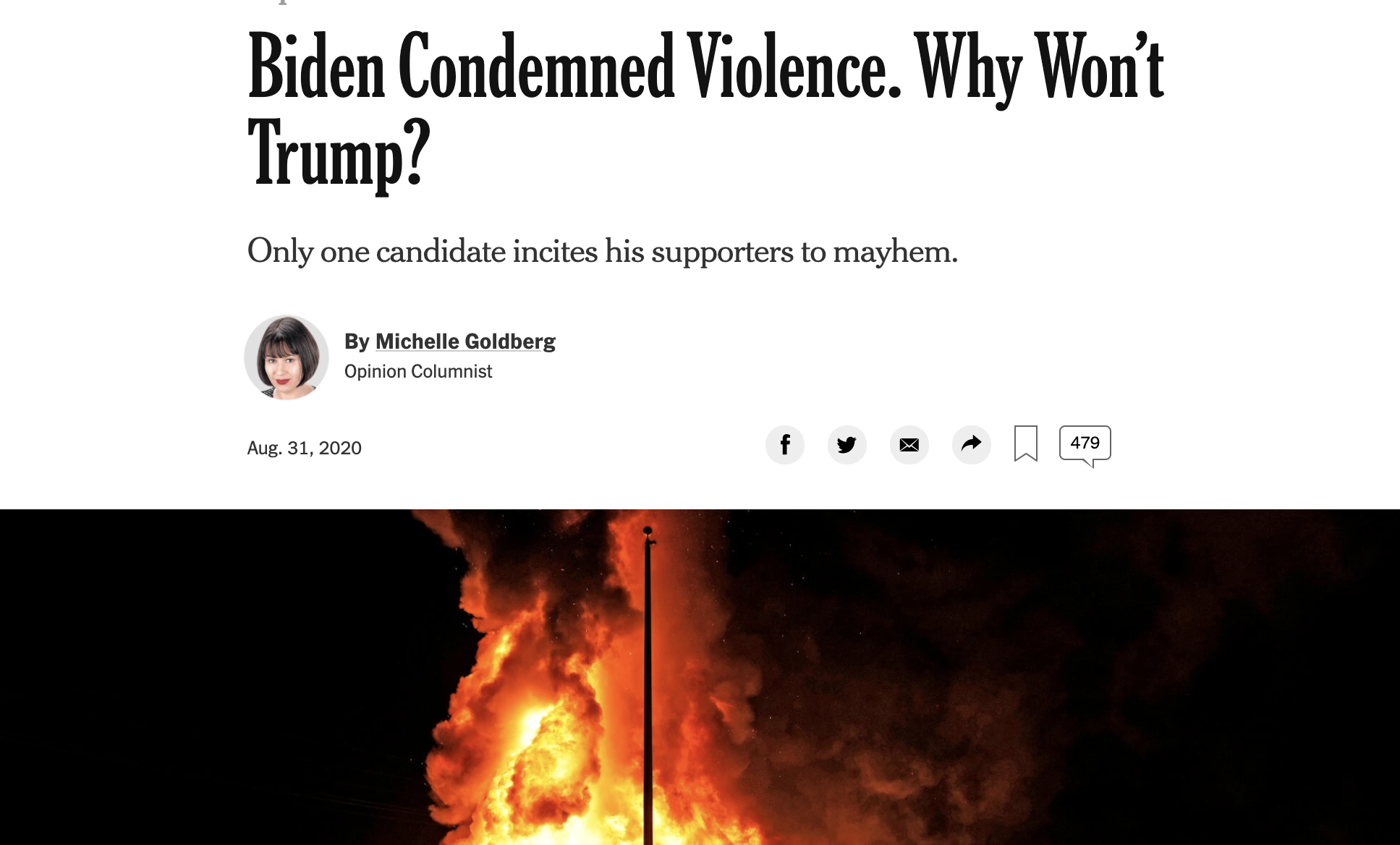 In an attempt to downplay President Donald Trump’s efforts to combat rioting, Michelle Goldberg of the New York Times wrote an opinion editorial trying to elevate and equate right-wing violence to the destruction caused by Black Lives Matter demonstrators and Antifa rioters.

In her article, Goldberg claims that Trump’s words and actions are meant to incite and “cheer” more violence because “his interests served by the destruction of civic peace.”

“If the president succeeds in making political violence a Biden liability, he’ll have all the more incentive to set this country on fire,” she claims.

Since June, Trump has consistently denounced destruction and chaos, calling for law and order and even offering to send federal law enforcement to the states suffering, even when they refuse the help.

“I will fight to protect you — I am your president of law and order and an ally of all peaceful protesters,” Trump said in early June.

Goldberg, however, ignores local and state complicity, opting instead for a narrative that paints Trump as a white supremacist sympathizer who encourages a certain type of right-wing violence, which she claims “is the main terrorist threat facing America.”

She claims Trump “urged his fans to thuggery since his first presidential campaign,” but only cites the St. Louis couple who defended their home against protestors who breached their neighborhood gate, and Trump’s suggestion that the 17-year-old who killed two people in Kenosha might have been acting in self-defense.

Instead of acknowledging the fact that Biden’s condemnation of violence only came after more than three months of rioting in cities around the nation, Goldberg attempts to make a case for the Democratic presidential nominee, declaring that “Biden’s campaign has gone on the offensive.”

She emphasizes Biden’s few generalized comments in Pennsylvania about rioting and feeds into the new sense of urgency displayed by the corporate media about the importance of condemning rioting now that it is showing up in the polls.

Despite the clear, unwavering bias against conservatives and Trump demonstrated by the corporate media, Goldberg warns the media against writing or covering anything that “uncritically transmits [Trump’s] propaganda” about the rioting.

“There’s reason to fear that the president’s attempts to terrify suburban swing voters could work, especially if the media uncritically transmits his propaganda. But that only shows how much American politics is trapped in Trump’s alternate reality,” Goldberg writes.