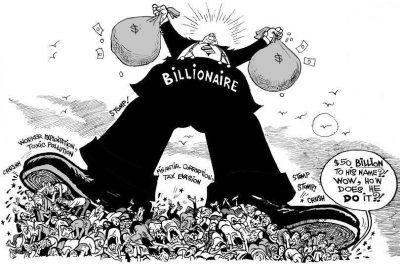 As we stagger towards the ultimate expression of our fake democracy in November it’s important to acknowledge what won’t be changing a bit whichever of the two parties of capital come out ahead with a minority of the American electorate’s support. The richest people in the nation, an ever-smaller group as inequality, showing massive growth of poverty, disease and the profits of warfare, will not only maintain their historic control but also exercise more of it than ever in the past.

The capitalist pandemic and economic collapse will get worse before things get better and they won’t get better until we stop swallowing the republican-democratic party line about what high ideals this nation stands for in contradiction to the low reality of what it is. You know, all that stuff many are upset about, divided over and struggling to understand without needing more therapy, drugs, religion, guns, shopping, voting and other distractions.

Let’s get this straight: our country began in the 15th century and was officially founded by the original 1% in the 18th and has been controlled by that same percentage ever since. When the upper class was given land grants and whatever else the theft of a “new world” was labeled, it looked around at millions of acres and demanded that the mother country send help to do the work necessary to build a prosperous colonial outpost. Our nation of peasants and slaves started with a giant influx of cheap labor first coming from economic bondage in England and later in physical chains from Africa. The immigration policies that cause division in our modern society pitting those who profit from it against those who bear the loss for it has not changed a bit in economic essence. Cheap foreign labor is more profitable to capital than higher paid nationals and when some of those cheap foreigners eventually become national they tend to resent the newest shipment of foreigners who cheapen their wages and threaten their security.

That was true when the original English immigrants became greatly upset as Germans began flocking into America back in the 17th century. At one point in the 20th century people of English and German descent represented a majority of the American population. The national origins of present generations of immigrants may have changed but the economic system guaranteeing profit they create for investors at loss to native workers is exactly the same as it was back then. It’s capitalism, no matter how much cosmetic language is used by those who disguise it with flowery fiction about freedom, democracy and other euphemisms for injustice to humans and the natural environment, and crippling insults to intelligence. Calling a terminal cancer ward a health spa doesn’t mean everything is okay for the residents just because investors in a multi-billion dollar market brand – cancer – are doing quite well, thank you.

And no matter how American some immigrants eventually become, most can be and are replaced when the need arises for more profit and capital ships jobs to foreign lands with cheaper labor or opens doors here to newer, lower cost help, whether as farm workers, coal miners, janitors, gardeners or silicon valley programmers -cheaper than our own college grads – and the folks who clean their toilets in silicon valley’s country club workplaces.

Current generations of humane and sincere supporters of immigration who have bought the mythology of America opening its arms to the poor and suffering in order to give them the right to vote for lesser evils and live in slums, ghettos and foreign language speaking isolation might as well learn how to make power-less salutes as they march to the polls or mailboxes to vote for lesser evils who represent the same economic system of private profit and public loss. Some electeds are slightly more kind about just how low the losers are allowed to sink while war and pet care take precedence over peace and health care in our great democracy, which has always rhymed with hypocrisy, especially at the present moment when it is more expensive, treacherous and dangerous than ever.

As divisions of class grow uglier and more obvious, with a handful of billionaires increasing already bloated and incredibly immoral wealth while millions sink into hardship and poverty, awareness of racial discrimination has finally come to the surface of American society, even beyond the earlier awakening in the civil rights era of the 1960s. The progress from those days, while enormous by comparison to earlier reality, has only meant better lives for some, not all dubbed with the evil racist labels denoting skin tones that erase the essence of humanity.

Still, the newer consciousness promises much more substantial change than that of a past which, according to market dictates of profit and loss, only affirms some while negating most and seeing to it that those who have the most stay above it all. And just as in the days of slavery when class came to the plantation and house negroes lived at a much higher standard than field negroes, today there are professional people “of color” in government, industry, finance, whose lives matter far more than the majority in ghettos, prisons and poverty, just as with the rest of the population living with economic barriers every bit as damaging and anti-social. The fact that there are rich “people of color” has no more bearing on the society’s goodness than that there are rich immigrants. They are still a tiny minority among Americans who are native born, foreign born, of color, no color, bi-sexual, bi-polar, agnostic or religious and are part of the more than 90% who are not rich except in their dreams or hallucinations. Even indigenous people who are wealthy hardly means that Indian reservations are not still the most poverty suffering communities in the nation.

The facts are undeniable and being seen and understood by far more than in the past, and so authority is working extra hard to somehow obscure them before the people band together and conduct a truly revolutionary transformation of society that benefits the overwhelming majority of people, instead of the historical and present reverse which blesses a tinier minority than ever before. Dedicated and well meaning advocates of social change are engaged in trying to achieve short term gains at a critical moment by working in the capitalist parties but they are only assured what happened in the sixties if they maintain that program. There will be more supposed minorities rising to professional and upper middle class status while things will get worse for the majority of all Americans in a disintegrating social and natural environment with policies to extract minority profit guaranteed to inflict more grievous and deadly loss to the majority.

While we are being driven further apart by both major and minor anti-social media that highlight the worst aspects of society and focus on individuals and minority groups, a fast growing number are becoming more aware of the lies and distractions and are dedicated to working together, across artificial lines created by rulers and adhering to humanitarian and democratic ideals that best serve the majority. It remains to be seen if the rising forces of real democracy and opposition to political economic domination by minorities, which can only guarantee failure for humanity, are transformed into a new day and age not only for America but the much wider world. The present sinking global status of the American empire whose only remaining strength is ability to murder is a good sign but change has to come from within and not just from outside since the pending and greater collapse is not simply threatened nationally.

The global environment under assault by profit motives which operate for the dollar before any other consideration does not have a nationality; it speaks a universal language of all of us who breathe, eat, form communities and attempt to assure a future for our race. That race is not confined to one or another identity or national group created by dominating minorities; it is composed of all of us and if it doesn’t succeed in transforming material reality, far more than any minority will be lost. The sooner we realize that and work, together, to create a reality of public cooperation to benefit public good before any thought of private profit, the sooner our success.

It will take longer than an election and certainly beyond this one in November, but the work being done by those who already operate on that principle can help bring the necessary numbers along for the next attempt. It will have to be much more radical and involve much more than a simple vote, but all positive steps will lead in the right direction. That direction is directly opposite to the present rulers and the capitalist system that wont even ultimately benefit them, but will certainly be disastrous for all of us if we do not make the changes necessary to not only see to it that black lives matter, but that until billionaires lives stop mattering so much more than all of ours, no lives will have a future of any hope.

Featured image is from The Socialist Network