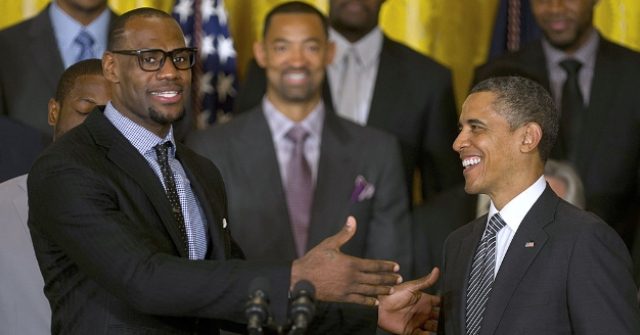 Ex-President Barack Obama involved himself in the deliberations of the NBA players who led last week’s boycott over the Jacob Blake shooting, according to reports.

Obama presided over the conference call when a group of players, including LeBron James and Oklahoma Thunder player Chris Paul, hashed out their demands and statements ahead of last Wednesday’s walkouts.

Paul reportedly reached out to Obama — who has been known to counsel many players who dabble in social justice causes –and asked him for advice on proceeding with the boycott idea.

The boycott ended after a single day once the wealthier players had it pointed out to them that younger players would be put in a financial bind if a boycott lasted too long.

CNN added: “Before NBA players decided to resume playing, National Basketball Players Association President Chris Paul reached out to Barack Obama, a person familiar with the call told CNN, and asked the former President if he would offer his counsel to a group of NBA players. The source also confirmed that Los Angeles Lakers star LeBron James was on the call. It was Paul, the source said, who organized the discussion.”

“As an avid basketball fan, President Obama speaks regularly with players and league officials,” spokesperson Katie Hill told CNN. “When asked, he was happy to provide advice on Wednesday night to a small group of NBA players seeking to leverage their immense platforms for good after their brave and inspiring strike in the wake of Jacob Blake’s shooting.

“They discussed establishing a social justice committee to ensure that the players’ and league’s actions this week led to sustained, meaningful engagement on criminal justice and police reform,” Hill added.

The NBA’s coronavirus plagued season ground to a halt last week after the players convinced others to launch a boycott in protest of the police-involved shooting of Jacob Black in Kenosha, Wisconsin, several days before.

The player’s actions led to a temporary halt to the playoff games for Wednesday and Friday when the Milwaukee Bucks refused to hit the court.

“The past four months have shed a light on the ongoing racial injustices facing our African American communities. Citizens around the country have used their voices and platforms to speak out against these wrongdoings,” the players said in a statement last week.

The league was once again back on schedule for Saturday’s games.

Joe Biden: If Any Portion of Aid Bill Fails, ‘I Will Acknowledge It Failed, But It Will Not’