The Oregonian reported Sunday night that the man under investigation in Saturday’s fatal shooting of a right-wing protester after a pro-Trump caravan in Portland is a supporter of Black Lives Matter and Antifa who was arrested on weapons charges and released earlier this year.

The victim of the attack has been reported to be Aaron Danielson, known also as “Jay.”

A 48-year-old man who was accused of carrying a loaded gun at an earlier downtown Portland protest is under investigation in the fatal shooting Saturday night of a right-wing demonstrator after a pro-Trump rally.

Michael Forest Reinoehl calls himself an anti-fascist and has posted videos and photos of demonstrations he attended since late June, accompanied by the hashtags #blacklivesmatter, #anewnation and #breonnataylor.

Reinoehl’s posts indicate he attended many protests in Portland that began three months ago after the death of George Floyd in Minneapolis under the knee of a police officer.

On July 5 at one of the demonstrations, Reinoehl was cited at 2:10 a.m. in the 700 block of Southwest Main Street on allegations of possessing a loaded gun in a public place, resisting arrest and interfering with police.

He was given a date to appear in court later that month, but the allegations were dropped on July 30 with a “no complaint,” according to court records. The documents don’t indicate why prosecutors decided not to pursue the accusations. Reinoehl spent no time behind bars.

A press release from the Portland Police Bureau described a July 5 arrest, which happened after a riot began July 4:

To protect the life and safety of personnel both inside and outside of the Federal Court House, just after 11 p.m., a riot was declared. Officers began dispersing the crowd moving demonstrators from the closed area of Southwest Broadway to Southwest 1st Avenue, Southwest Columbia to Southwest Yamhill Street.

As officers dispersed the crowd, demonstrators threw bricks, mortars, M-80s, and other flammables towards them. To defend themselves from serious injury, officers used crowd control munitions and tear gas at this time. Lasers were directed at Officer’s eyes, which is unlawful. Despite having moved from the closed area, demonstrators began to trickle back to Southwest 3rd Avenue, starting a large bonfire in the middle of Southwest 3rd Avenue and Southwest Main Street 1 a.m.

During the dispersal, numerous business windows were shattered by members of the crowd. Officers made several arrests, including one at Southwest Main Street and Broadway where a male fought with officers. Officers were able to get him in custody and recovered an illegally possessed loaded firearm and a knife.

On July 5, police released a photograph of that arrest (below). Andy Ngô of the Post Millennial reported Sunday that the photograph was of Reinoehl. 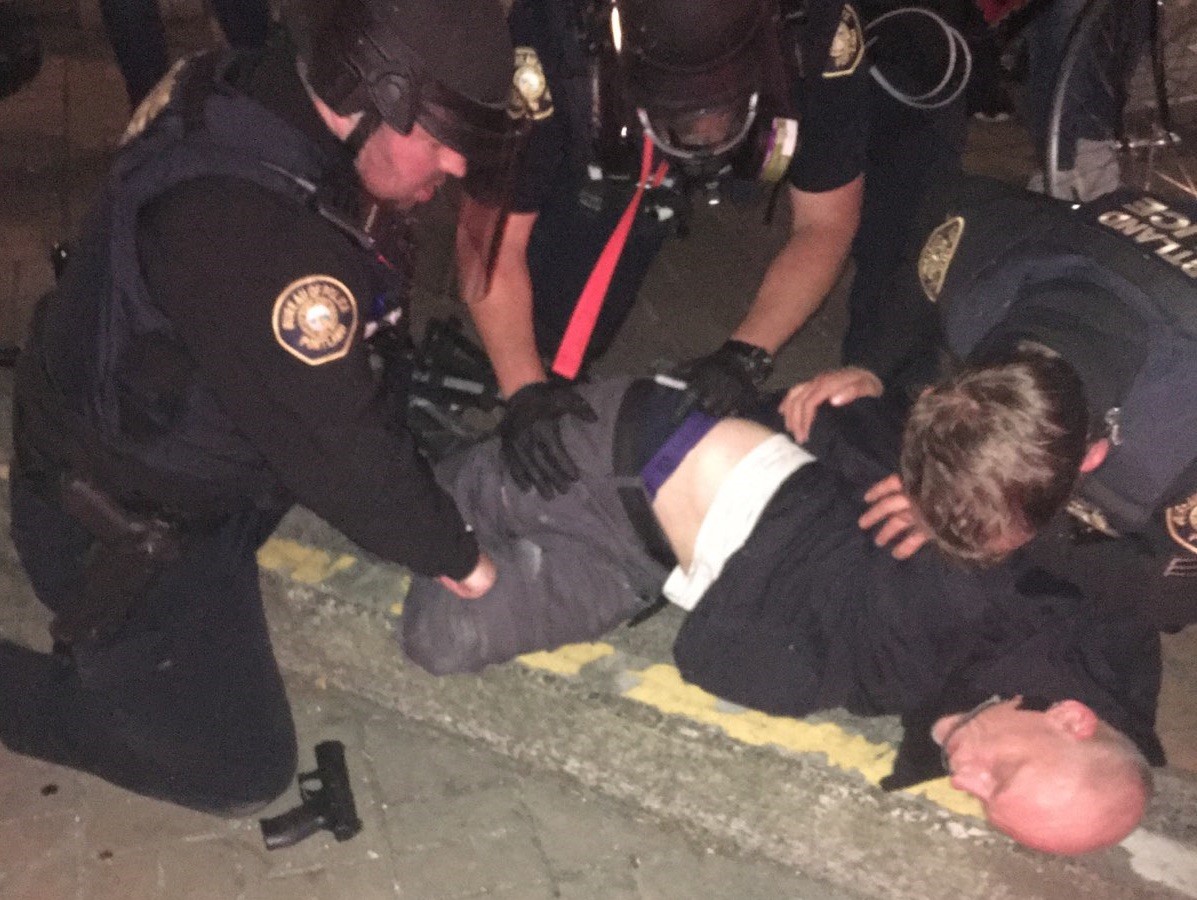 Portland Police tweeted at the time:

Officers arrested a male at SW Broadway and Main St. who had a loaded firearm on his person. He fought with offices during the arrest. pic.twitter.com/RXgYHnB5ue

This knife and firearm were seized during this arrest. The loaded firearm possession violated Coty code. pic.twitter.com/M2LyGuAesJ

In addition, the Oregonian reported Sunday, Reinoehl posted on Instagram that he was “100% ANTIFA all the way,” adding the hashtag “#blacklivesmatter.”

According to the Oregonian, Reinoehl also faced other charges from a separate arrest, including unlawful possession of a gun.

Many of the rioters who have been arrested in Portland over the past several months have been released shortly thereafter.

Democrats have called the riots “peaceful protests” and criticized federal law enforcement for their involvement, over several weeks, in defending the federal courthouse in Portland from arson and vandalism.