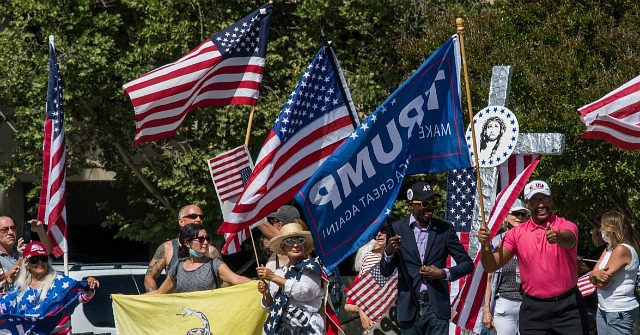 Three suspects were surrounded by law enforcement Sunday following an alleged shooting during a pro-Trump caravan rally in Woodland Hills.

The Los Angeles Police Department (LAPD) SWAT Team surrounded the suspects who were barricaded inside an apartment complex, according to Patch.com.

“Police responded to a report of gunshots at a caravan rally in support of President Donald Trump in the 20600 block of Ventura Boulevard at about 11:30 a.m. Sunday. No one was wounded in the shooting,” the report said.

Officer Drake Madison of the LAPD said Ventura Boulevard was shut down for hours, adding that it was “still a fluid situation.”

The building where the suspects were located was locked down and all nearby apartments evacuated, according to NBC Los Angeles.

At 4:30 p.m., reporter Emily Valdez tweeted video footage of LAPD vehicles and a helicopter overhead and said a tire on a vehicle in the caravan was shot out:

An hour prior, Valdez tweeted photos of the caravan and what appeared to be counter-protesters:

Resident Chantel Bonet lives in a townhouse at the complex in Woodland Hills with her two children and said she heard running and called 911, according to the Associated Press (AP).

“They told me to stay inside and keep the door locked,” she said, adding, “It was pretty scary.”