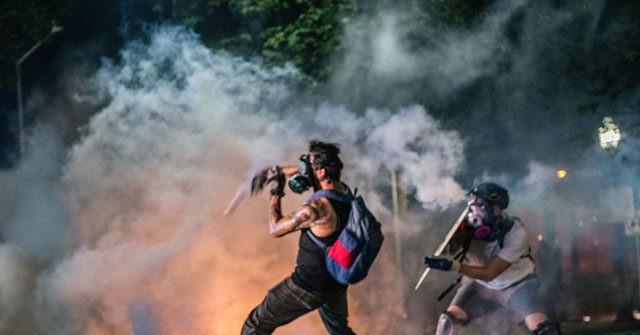 Rep. Jim Banks (R-IN) says American taxpayers should not be paying to provide federal unemployment benefits to “Antifa thugs” and those associated with Black Lives Matter (BLM) who have started riots across the United States.

Banks explained his plan in an exclusive interview with SiriusXM Patriot’s Breitbart News Saturday, saying such a policy would have an immediate impact in terms of ending the months-long rioting.

“It’s occurred to me over the last few weeks that it’s not just George Soros and left-wing groups like BLM that are funding many of these riots and mob protests that are turning violent in the streets of America’s cities, but if you think about it, you and I are also funding it in a way,” Banks said:

These protestors, the Antifa thugs that are showing up and causing so much destruction are also getting $600 a week through unemployment benefits through the CARES Act and the federal benefits that have come about through the coronavirus aid. I want to put a stop to it. If they’re unemployed and they show up on a daily basis, and they’re traveling all over America — especially many of them coming to Washington, DC — the last thing they deserve is our tax dollars going into their pockets to pay the costs for these professional protestors and rioters and causing this kind of ruin and destruction in places like Washington. So that’s one big component of my bill. [Emphasis added]

There are videos online of protestors holding up traffic jams … I think these protestors should have to pay the cost of the law enforcement that have to come out and deal with situations like these. [Emphasis added]

“Why should hardworking taxpayers in my district have to pay whenever these thugs shut down the streets in places like Washington,” Banks said. “They should be on the hook to pay for it too.”

As Banks filed the legislation, a number of attendees from President Trump’s Republican National Convention (RNC) were accosted by Antifa and BLM protesters outside the White House.

Sen. Rand Paul (R-KY) and State Rep. Vernon Jones (D-GA) were both accosted, along with others. Breitbart News was on the ground when the instances occurred.

Over the weekend, a Trump supporter was shot and killed in Portland, Oregon, where riots have been ongoing for more than three months.

“Antifa is getting left-wing funding from some source … they’re not just getting that they’re also getting additional unemployment benefits,” Banks said. “So if we took away those sources of federal tax dollars that are going in their pocket, I think it would put a lot of these guys in a situation where they would think twice about their violent activities in places like Washington, DC.”

The 62nd Anniversary of the Cuban Revolution: An Unprecedented Chapter in World History