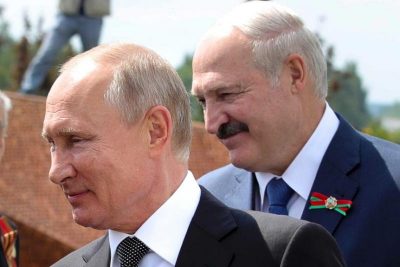 Support by Britain, France, Germany (the E3), and Brussels for Iran’s right to buy and sell conventional arms once the UN embargo on the practice expires in October and their support for preserving the JCPOA in defiance of Trump regime opposition on these issues are aberrations in US/European relations.

Despite expressing rhetorical and Security Council support on both issues, it’s unclear whether the E3 and Brussels will hold firm against heavy US pressure and threats — demanding the bloc shift policy and bend to its will against Iran.

The jury is very much out on this issue and may be for some time.

The prospect of Biden perhaps defeating Trump in November, taking office in January, and going along with the E3 and Brussels on Iran may give the bloc reason to hold firm against Trump regime pressure and threats.

As explained in a previous article, Belarusian President Alexander Lukashenko was overwhelmingly reelected on August 9 by a near-62% majority — not the officially reported/inflated 80% figure.

Claims or insinuations by Trump regime hardliners and EU officials  that Lukashenko stole the election have no merit.

“(T)here were convincing reports of serious irregularities with ballot counting and reporting of election results (sic).”

By whom, he failed to explain, another example of Washington’s practice of making accusations without evidence backing them — phony Russian US election meddling the most prominent example.

When foreign elections don’t turn out as the US wishes, claims of fraud sans evidence follow time and again.

There’s no ambiguity about Lukashenko’s reelection — other than the unnecessarily inflated margin of victory.

Under UN Charter and other international law, no nation may legally interfere in the internal affairs of others.

It’s what the US does repeatedly, what it’s doing in Belarus, wanting the country transformed into a client state — the EU going along in defiance of international law.

Its authorities supported by Russia have the upper hand.

On Friday, EU foreign ministers announced sanctions on around 20 so far unnamed Belarusian officials over phony claims of election-rigging the bloc consistently ignores when occurs for real in nations where pro-Western candidates win.

The double standard is breathtaking, notably given how EU countries are allied with Washington’s imperial project, including its wars of aggression on nonbelligerent states.

Their alliance with the US against Belarus is further proof that all Western and Eastern European countries are fantasy democracies, none the real thing — on most issues operating as virtual US colonies, clearly the case on Belarus.

On Friday following a bloc meeting in Berlin, Czech Republic Foreign Minister Tomas Petricek said “(w)e have general agreement on how the (sanctions) list will be structured and who will be, more or less, on” it — Lukashenko most likely included initially or at a later time.

Asked about his inclusion, Petricek said he “should be on the list,” adding:

“The question is whether in the first stage, or a later stage if there is no progress.”

“We put all contacts on pause until the situation in Belarus stabilizes.”

On Lukashenko’s request based on Belarusian CSTO membership, he formed and offered to send “reserve police” to the country if needed, adding:

He’ll refrain from taking this step unless “the situation gets out of control, and (if) extremist elements, hiding behind political slogans, cross certain boundaries such as looting, setting fire to cars, seizing administrative buildings and so on.”

No need exists to act at this time. Putin hopes Belarusians will resolve things on their own with no need for Russian help.

“We are going to show them what sanctions are. They (Poles and Lithuanians) transited our territory to trade with China and Russia.”

“Now they will fly either through the Baltic Sea or the Black Sea to trade with Russia and so on.”

“In terms of the embargoed products (food products embargoed by Russia) I suggest they forget about them. We will show them what sanctions are.”

“They have an exaggerated sense of self-worth and have forgotten what Belarus is.”

“They think they can threaten us with tanks, missiles.”

“We will see who will be left scared. We will show them what sanctions are.”

“I have instructed the government to work out measures to redirect all trade flows from Lithuanian ports to others.”

“We will see how they will be doing after that. The transit of our cargo flows generates 30% of the Lithuanian budget.”

“What else do they need? They think too much of themselves. We will show them their place.”

“We survived” earlier imposed Western sanctions. “We will survive this time as well. The world is no good without good people. It is useless to scare us.”

“Why did it not come? This immediately makes us think that, in fact, a position on the results of these elections had already been formulated” between the US and EU.

“Therefore, someone may doubt the results, but I have every reason to doubt that those who doubt (them) were completely honest.”

“Therefore, we proceed from the fact that the election took place.”

“We…I did it right away. We recognized its legitimacy.”

“And as you know, I congratulated Alexander Grigorievich Lukashenko on his victory in this election. That is all.”

In a previous article, I explained that protests since the election were made in the USA.

They’re similar to what erupted in other countries pre-and-post elections in support of pro-Western candidates — especially if or when a US favorite doesn’t defeat an incumbent Washington wants toppled.

Tsikhanouskaya lost, claims otherwise likely scripted by her US handlers.

A figure with no political experience, she’s easily manipulated by US and EU dark forces opposed to Belarus’ independence from Western control.