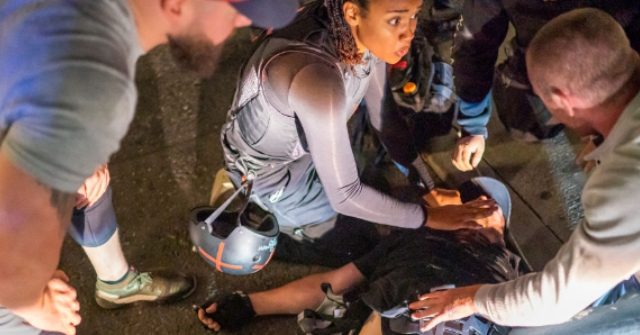 A turbulent day of riots and violence in Portland turned deadly Saturday night, as a man was shot and killed after an explosion of gunfire.

Shortly after 9 PM PST, Twitter accounts reporting on the unrest became filled with reports of a man being shot in the chest. Shortly after that Andy Ngo, editor at-large for The Post Millennial, posted video of a man laying in the street, surrounded by law enforcement.

BREAKING: A person was shot in the chest in downtown Portland. Unknown if related to antifa/BLM vs Trump caravan clashes. Unconfirmed if person is dead. pic.twitter.com/hS7im5Umlt

Shortly after that, Ngo was able to confirm that the victim had died.

EXCLUSIVE: I can confirm it is a homicide. The person shot in downtown Portland is deceased.

Some witnesses are saying the suspect shooter is a black male. Police have not released an official suspect description.

It is unclear at the time of this writing, whether or not the man was involved with the demonstrations in the city. On Saturday, Portland Mayor Ted Wheeler defiantly refused President Trump’s offer to send federal law enforcement to Portland.

Andy Ngo obtained an alleged video of the incident, though it is shot from a distance and somewhat difficult to tell what transpired.

“Portland Police officers heard sounds of gunfire from the area of Southeast 3rd Avenue and Southwest Alder Street,” the Portland Police Bureau said in a statement. They responded and located a victim with a gunshot wound to the chest. Medical responded and determined that the victim was deceased.”

Tensions were high in Portland all throughout the day, as a caravan of Trump supporters drove through the city.

As the Associated Press reports:

The caravan of Trump supporters had gathered earlier in the day at a nearby mall and drove as a group to the heart of Portland. As they arrived in the city, protesters attempted to stop them by standing in the street and blocking bridges.

Videos from the scene showed sporadic fighting, as well as Trump supporters firing paintball pellets at opponents and using bear spray as counter-protesters threw things at the Trump caravan.

‘There have been some instances of violence between demonstrators and counterdemonstrators,’ Portland Police said via Twitter. ‘Officers have intervened and in some cases made arrests.’

According to the Oregonian, “The person lay in the street as police medics tended to their wounds. Next to the body was camouflage gear with infidel and thin blue line patches, which commonly indicate support for law enforcement. Police taped off the area.”

Footage was eventually released of officers attempting to resuscitate the man.

The New York Times is reporting that the victim was wearing a hat for “Patriot Praayer,” a conservative group based in Portland. Though, this report has not been independently confirmed.

NEW: 1 man has been shot and killed in Portland.

The man was wearing a hat with insignia for Patriot Prayer, a far-right group.https://t.co/vxK3J0NH2t

Portland is nearing 100 consecutive days of riots and/or civil unrest.