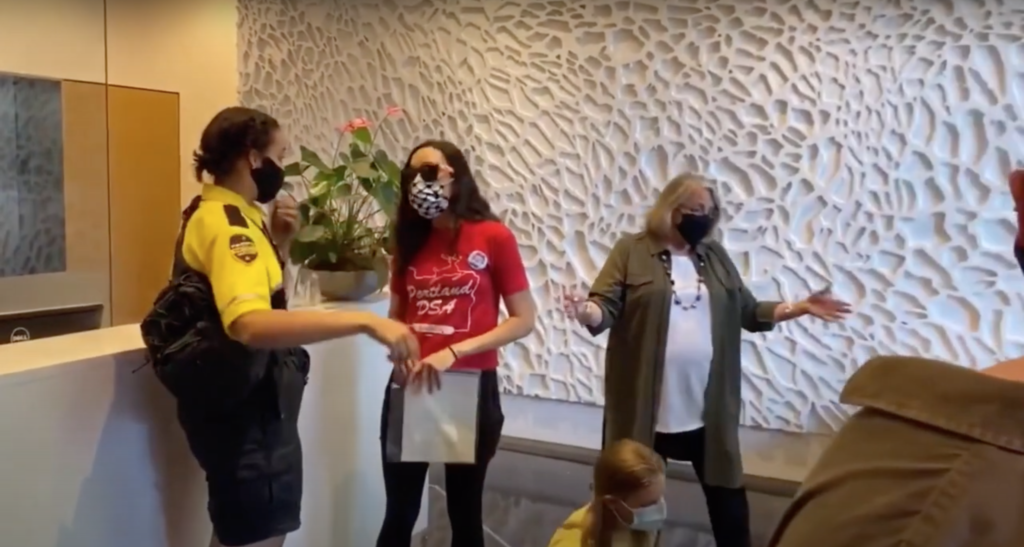 The demand letter also commands Wheeler, who it labels as a “true embodiment of white supremacy” to “complete abolition of the Portland Police Bureau by 2022, with no private or technological replacement” and redirect the money from the PPB into social programs.

Folks have locked themselves in the lobby of Mayor Ted Wheeler’s apartment. Saying they won’t leave till the mayor comes and listens to their demands. #blacklivesmatter #protest #pdx #Portland #Oregon #BLM #PortlandProtest #pdxprotest pic.twitter.com/9pYN9ItYP6

Local news reports claim there were “about 10 people inside the lobby,” but that a larger crowd—estimated to include over 100 people—congregated outside the building playing loud music, dancing, chanting, and holding various signs.

Had to take a moment for Jaelin 🏀

I am in front of Mayor Ted Wheeler’s home, where there’s something of block party happening. A handful of protesters are occupying the lobby. Metal(ish) music is playing#PortlandProtests pic.twitter.com/F7lRPQePaq

Thank you Portlanders for a powerful display of solidarity at last night’s demonstrations. Racial justice requires the entire community to come together. Let’s continue to focus on the work ahead and move forward with reform, recovery and resilience plans for PDX.

While the crowd of protestors outside the building dissipated later that night, rioters gathered around the Portland Police Association building and attempted to set it ablaze, ultimately choosing to light a dumpster mattress on fire instead. According to local news, “the situation was quickly declared a riot, and multiple arrests were made.”

Over the last few months, Portland has suffered massive violence and damage from rioters protesting police brutality in light of George Floyd’s death. Many of these attacks by rioters have been targeted at the PPA, with destruction and vandalism even targeting a memorial to a fallen police officer.