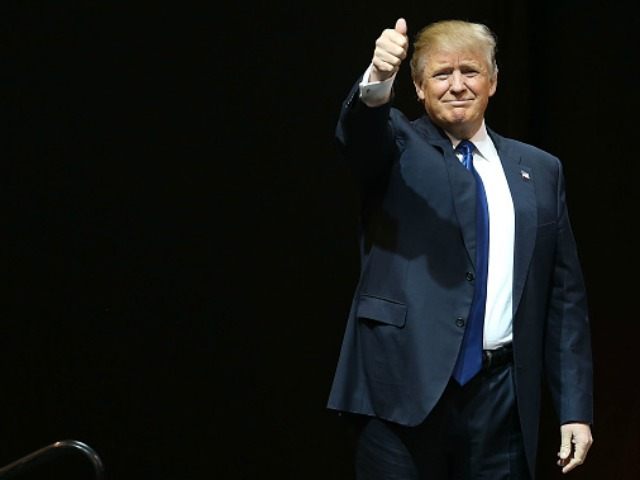 7:28 PM: Trump rips the radical left’s effort to divide everyone by race. He blames CNN, MSDNC… He says “they stoke the flame” and are “tearing us apart.” He says their ratings aren’t great.

7:17 PM: Trump says if Biden gets in the White House, China would “own” the United States. He says if Democrats want to stand with rioters and flag-burners, that’s up to them. He asks the crowd if anyone enjoys watching rioters burning the American flag. He says the GOP will be the party of patriotic heroes and law enforcement officials who keep America safe. Trump says you must vote for him if you want to save democracy from the mob. He calls Biden the worst candidate ever put by the Democrats.

7:15 PM: Trump says if Biden wins, he will have lost to a “low-IQ individual.” He says if that happens, the radical agitators will take over government and nobody will be safe in Biden’s America. He says he can’t call it Biden’s America because Biden “doesn’t even know he’s alive.”

7:10 PM: Trump says today’s Democrats are “filled with hate.” Trump says just look at Biden’s unhinged supporters yelling like lunatics in the streets. Trump says he says, “you know what I say? Protesters, your ass. I don’t talk about my ass. They are not protesters….” Trump says they are anarchists, agitators, rioters, looters who don’t even know how George Floyd is.

7:09 PM: Trump says Biden’s “masters” tell him what to do and they want to erase borders, tear down our history, demolish the suburbs, and take away your guns.

7:08 PM: Trump says we’ll have an “unbelievable next year” unless “somebody stupid gets elected and raises your taxes.”

7:06 PM: After mocking “idiot” reporters calling the protests “friendly” while cities are burning behind them, Trump says he is going to win New Hampshire and then four more years. Trump talks about securing borders, bringing back manufacturing jobs, and rebuilding the military under his first term while wiping out ISIS.

7:00 PM: Trump rips the “thugs” outside of the RNC last night and rips DC Mayor Muriel Bowser. He says his supporters walked out “to a bunch of thugs.” Trump says they weren’t friendly protesters. He says the mayor gave bad instructions last night and that should have never happened. He says thank God the DC police protected Sen. Rand Paul (R-KY). Trump says Paul was in big trouble last night, and he adds that the four police officers who protected Paul should be brought over to the White House for a medal. He says the mayor should be “ashamed” and this is what happens all over the place when Democrats run cities. Trump says we’re not supposed to go in unless we’re invited in or call it an “insurrection,” but “that’s a big statement.” Trump says he is going to “look at it” because people who go to the White House to celebrate the country shouldn’t have to deal with the “thugs.” Trump says Biden is “weak as hell” and didn’t even bring “law and order up as a subject of discussion” during the entire DNC.

6:58 PM: Trump says Biden is coming out of the basement because the poll numbers have swung. “A rapid swing,” Trump says. Trump talks about staying out of endless wars and bringing troops home from endless wars. Trump says the convention was “quality television” with compelling content. He says Herschel Walker’s endorsement was from the heart.

6:55 PM: Trump says he has some good 2016 memories in Manchester, but 2020 is the most important election in history. He says it was his great honor to accept to Republican nomination for president last night. Trump says last night drove the fake news crazy and asks does anyone have any doubt that he will win. He says the “poll numbers have swung.”

“We’re gonna win,” Trump says. “Does anyone have any doubt?”

6:50 PM: Trump exits Air Force One and is making his way to the stage for the rally. Raucous crowd chants “USA! USA!”

Air Force One wheels down @flymanchester.

6:30 PM: Air Force One in New Hampshire. Trump should be landing shortly:

The President’s supporters can’t wait to see him ⁦@realDonaldTrump⁩ in Londonderry NH at the airport. They believe he will beat Joe Biden here. pic.twitter.com/TZNpRCRinM

People are waiting in line to get to tonight’s Trump rally at the Manchester NH airport. pic.twitter.com/HdEdK6xiSE

Pool report: “Many of the protesters along the avenue greeted the motorcade with raised middle fingers. There were far too many middle fingers to count. Several of the peope in the crowd opted to raise both of their middle fingers in a double barreled one finger salute.”