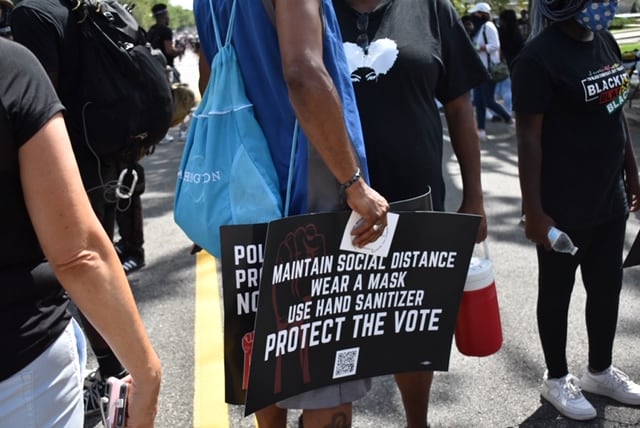 Democratic presidential nominee Joe Biden came out of the basement Thursday night to target President Donald Trump and his acceptance speech. Biden, along with his Democratic supporters, said the event held by Trump failed to abide by the COVID-19 recommendations to mitigate the spread of the virus.

What was fascinating is that these same Democratic liberals supported and approved the March On Washington Friday, which was expected to have roughly 50,000 people in attendance. Thousands of marchers gathered like sardines in a can around the Lincoln Memorial, streets were closed and for the most part people were everywhere and touching everything.

One DHS official, who I have known for some time and who is frustrated with the double-standard, told me on background, Biden and the Democrats see COVID-19 as a “woke virus that only attacks in churches, schools, and republican gatherings.”

“It probably has a tiny virus looking man bun if you analyze it with a powerful microscope,” the official added jokingly.

I tend to agree with the assessment, man bun and all.

Why? Because after locking us and our families down for months, the National Park Service told The Daily Caller Thursday that it wouldn’t be enforcing the wearing of masks or social distancing in the city during the protests.

I should know that was the case because I was there most of the day with my staff writer and producer Jennie Taer. In fact, the city is not requiring a quarantine mandate for protestors arriving from outside the city in areas that have seen a resurgence. D.C. officials had been enforcing this law mandate previously.

So when Biden described Trump’s the address as a “super spreader event” you have to question if they think we’re all idiots. I mean don’t these Democrats think for one second we’d be asking why one set of rules for some and not others?

“Mr. President, Americans are canceling weddings and holding funerals without family,” said Biden. “They’re sacrificing so more Americans don’t have to die. But instead of leading by example, you hosted a super spreader event on the South Lawn.”

They Just Captured the Jihadist Leader of Muslim Brotherhood