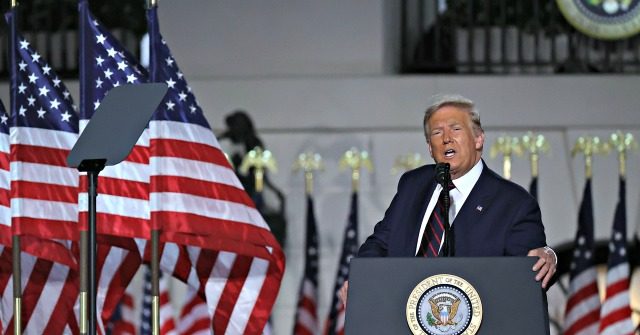 President Donald Trump delivered a dramatic Republican National Convention speech on Thursday, hearkening back to the issues that drove his 2016 campaign to victory.

The president spoke at length about his efforts to deliver fair trade, border security, and law and order for the American people, recalling the promises he made in 2016.

“I did what our political establishment never expected and could never forgive, breaking the cardinal rule of Washington politics,” he said. “I kept my promises.”

The president’s 70-minute speech was among the longest convention speeches in modern history, as he spoke about his victories in the swamp of Washington, DC.

Trump acknowledged that he faced doubt from the Washington political establishment when it came to issues of tough trade negotiations with China and renegotiating NAFTA.

“Washington insiders asked me not to stand up to China – they pleaded with me to let China continue stealing our jobs, ripping us off, and robbing our country blind,” he said. “But I kept my word to the American people.”

But he set the biggest contrast between himself and his agenda versus that of former Vice President Joe Biden.

On every issue, Trump offered brutal criticism of former Vice President Joe Biden, his Democrat opponent for the presidency.

Biden, the president said, would only turn the country back to the failed political establishment.

Biden, he said, would only sell out future generations by rolling back his hard-earned gains.

“Joe Biden’s agenda is Made in China. My agenda is made in the USA,” Trump said, as the crowd applauded and cheered.

Trump accused Biden of pandering to working-class Americans as a Democrat and betraying them in Washington.

“For 47 years, Joe Biden took the donations of blue-collar workers, gave them hugs and even kisses, and told them he felt their pain,” he said. “And then he flew back to Washington and voted to ship their jobs to China and many other distant lands.”

Trump also vowed to protect the unborn and the Second Amendment, reminding his supporters of the stark contrast on issues important to his base.

“Democrat politicians refuse to protect innocent life, and then they lecture us about morality and saving America’s soul?” he asked. “Tonight, we proudly declare that all children, born and unborn, have a God-given right to life!”

Most of all, Trump’s long-held belief in law and order and respect for law enforcement officers spoke volumes as the noise from angry protests outside the White House echoed around the building during moments of his speech.

Protesters brought a guillotine outside the White House and even beheaded a dummy that looked like the president as they shouted “F-ck Trump!”

“If the Democrat party wants to stand with anarchists, agitators, rioters, looters, and flag-burners, that is up to them,” Trump said. But I, as your President, will not be a part of it.”

Trump also smashed the Democrat political elites for trying to tear away opportunities for lower classes while enjoying the fruits of their privilege, describing them as “liberal hypocrites who drive their cities into the ground while fleeing far from the scene of the wreckage.”

“These same liberals want to eliminate school choice, while they enroll their children in the finest private schools in the land,” he continued. “They want to open our borders while living in walled-off compounds and communities. They want to defund the police, while they have armed guards for themselves.”

The president also directly addressed cancel culture — a new theme rising to the forefront of concern among his supporters in 2020.

Trump accused liberals of tearing down America’s institutions, despite their claim that Trump was betraying the country’s principals.

“Who is hiring the radical professors, judges, and prosecutors? Who is trying to abolish immigration enforcement and establish speech codes designed to muzzle dissent?” he asked. “In every case, the attacks on American institutions are being waged by the radical left.”

Trump’s lengthy speech was capped by an enormous fireworks display over the Washington Memorial firing up the words “TRUMP 2020” when the president was finished speaking.