I have written before about the oceans in the Humanity in Crisis series (e.g., Humanity In Crisis, Part 8: Missing Shoals, and the Blob). Today’s snap article is about AGL wanting to locate a floating gas plant off Crib Point in the environmentally sensitive Western Port Bay, Victoria.

And if anyone wants to voice their objection, submissions have just closed, but I was told that it was also only closing Monday.

“Energy company AGL says its proposed floating gas plant off the Mornington Peninsula will not impact nearby internationally recognised wetlands and marine parks, despite discharging up to 180 Olympic swimming pools worth of chlorinated water every day into Western Port.”

It appears AGL’s floating gas plant will discharge up to 47 kilograms of chlorine per day — exceeding safe levels for marine life in a 5-hectare area. It is no wonder environmental groups fear species will be exposed to the toxic wastewater. Oh don’t worry, AGL says it will reduce the water it takes during peak fish spawning months. Wow!

“The findings are published in an 11,000-page report it has submitted to the Victorian Government to support its push for the plant at Crib Point… [and] The document, known as an Environmental Effects Statement (EES), says the chlorine will either evaporate or dilute and will not have any adverse impact on marine plants and wildlife further away from the facility.”

The environmental groups say their findings are based on “poor science”. Shannon Hurley, from the Victorian National Parks Association (VNPA), has stated that the chlorine would affect the whole ecosystem — which makes sense.

The EES attempts to portray Western Port as a busy, degraded port, where the additional effects of the gas import project will be insignificant (EES Technical Report B, pp. 211-213). That is just not the case.

Western Port is an internationally significant marine ecosystem and is listed under the Ramsar Convention as a wetland of international significance. The local population, regular visitors, and users have high conservation values and treasure this part of Victoria. And the local councils and shires are putting forward aggressive campaigns and extensive submissions to preserve the area.

But how extraordinary to claim that because it is allegedly already degraded, this gives the company license to further degrade the environment. Imagine having that attitude with your home or the food you eat.

Yet again, it seems corporate interests override the fragility of the planet’s systems.

Submissions to https://engage.vic.gov.au/crib-point-IAC (Submissions are invited between 2 July and 26 August 2020.)

It may be too late to enter a submission. One could try. But voicing one’s objection tells the government that they need to start listening to the public. 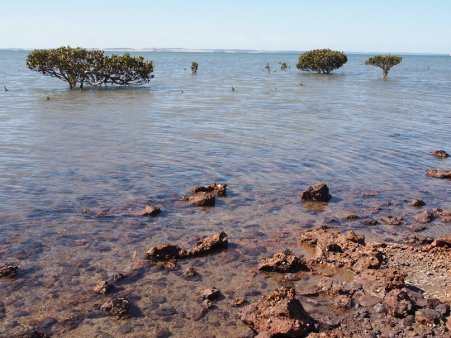