The New York Times ran an article Wednesday about how voters in Wisconsin are responding to the riots by switching their support to Donald Trump. This is a very strange thing to see in the progressive Gray Lady. Anybody who follows the paper and its politics closely knows exactly what is happening here. It is a desperate plea to Democrats to change their tune on the violence sweeping across American cities.

And Democrats seem to understand this as well. Joe Biden released a video Wednesday in which he provided his clearest condemnation of the riots, looting, arson, assault, and destruction of property committed by left-wing “protesters.” Biden said that while protesting was utterly American, these acts are not. He said they were wrong. He did not however, tell people specifically to stop and more importantly, he made no suggestion as to what government and law enforcement should do to stop it.

And it’s not just Joe Biden; look at this deleted tweet from Democratic Sen. Chris Murphy. 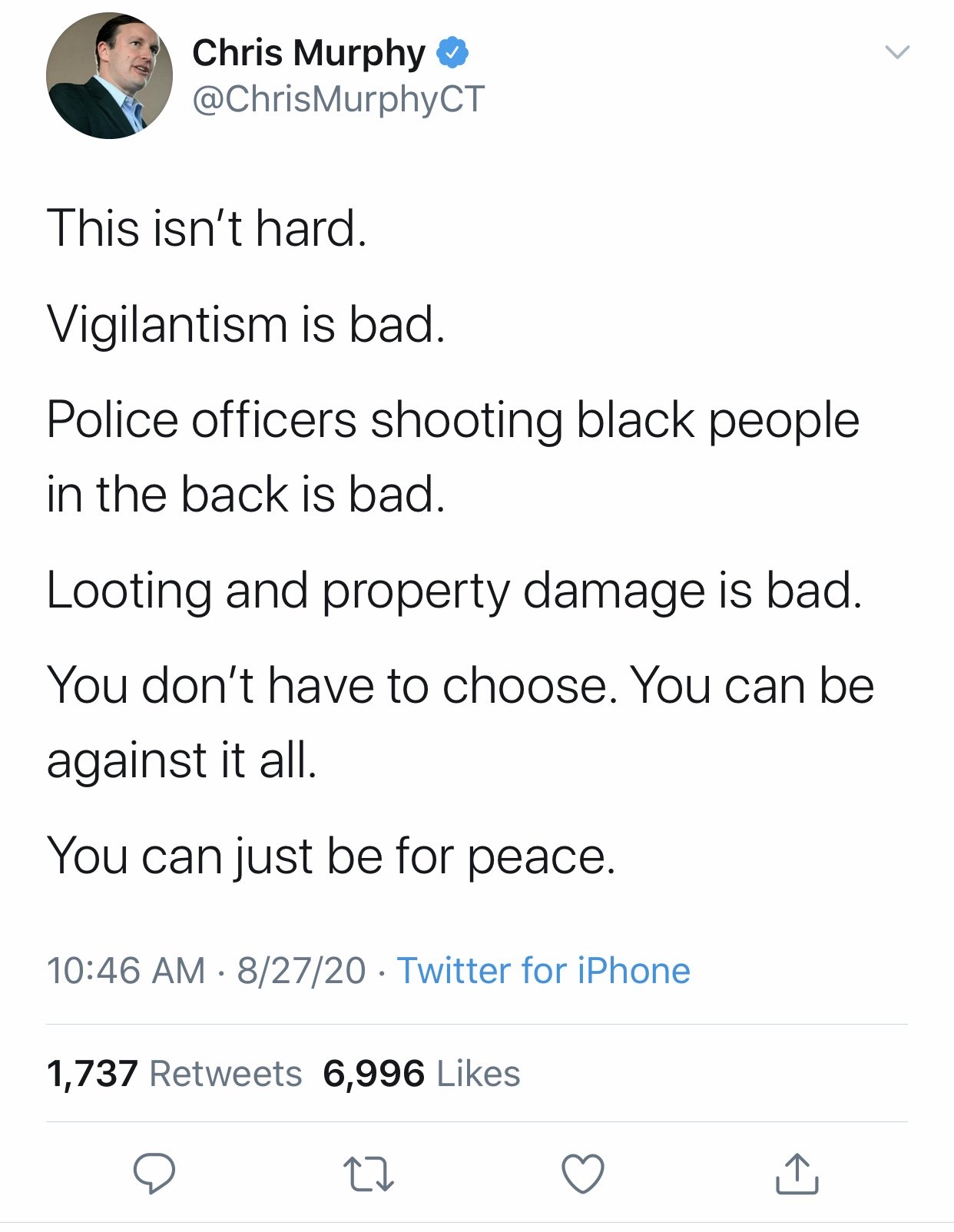 This is a far cry from the senator’s remarks on June 5 after rioters burned buildings and looted stores in Minneapolis, when he said, “These protesters are not terrorists, they are Americans seeking change. They are acting in a peaceful manner and law-enforcement should be used to protect their right to free speech.”

The Democrats and some of their stalwart media allies are clearly attempting a major course correction here, but they have a problem. It’s not just that changing their tune on wanton destruction at this late hour is transparently political — a point Don Lemon blurted out on TV this week telling Chris Cuomo that it’s showing up in the polls and in focus groups — it’s that not everyone on the left is on board with the shift.

Just last night, as the party of Jefferson and Jackson was trying to get tougher on these criminals, MSNBC anchor Rachel Maddow had a guest come on to present a “reality check” against South Dakota Gov. Kristi Noem’s convention speech, which was firmly fixed on the riots. That guest? Seattle Mayor Jenny Durkan. Yes, that Jenny Durkan, the one who said the occupied CHAZ zone in her city would usher in a “summer of love.” It did not. In fact, murder occurred there before it was forcibly shut down.

Durkan told Maddow essentially that everything is fine. Don’t believe all those images of fires and broken glass, stealing and shooting, people being harassed at restaurants, and police being cursed at by over privileged young white women who have no idea what they are talking about, just trust Mayor Jenny.

CNN went one better. Covering the “protests” in Kenosha, Wisconsin this week they had a reporter standing in front of a raging fire with a chryon below him that read “Fiery But Mostly Peaceful Protests After Police Shooting.” This is literally an internet meme about people pretending everything is fine while in a burning building.

Literally, this is fine. pic.twitter.com/m53Cm0BXlK

This is a very big problem for the Democrats who got no bounce from their Zoom convention or picking Kamala Harris as Biden’s running mate. And while polls, what few polls there are have been, are steady, there are warning signs as Trump’s approval ratings are increasing and his convention is garnering praise.

The establishment Democrats and whoever approved the piece in the Times clearly see what is going on here know they have to fix it fast, but there is no reason to believe that the progressive wing of the party with its outsized media presence will accept this shift to the center quietly.

They too see their moment as the NBA goes on a boycott, as woke corporations bend the knee to them. They don’t care about Joe Biden, as Rep. Alexandria Ocasio-Cortez made clear in her convention speech that didn’t even name him. Frankly, the Trump presidency is the best thing that ever happened to them and aside from Trump himself, they would be the biggest political beneficiaries of four more years.

Democrats understand this all too well. That tweet from Murphy above? He deleted it. Here’s why. He’s like a hostage.

I don’t normally delete tweets, but just got rid of one that mistakenly gave the impression that I thought there was an equivalency between property crime and murder.

Of course I don’t think that. So I just took it down.

Sometimes in politics you can smell fear, and that odor is plainly wafting all around the Biden campaign. Thus far they have been able to avoid any positions that clash too directly with their far left base. But now they know they must condemn the progressives committing crimes, who have they previously only referred to as peaceful protesters. They have already started, albeit very carefully as with Biden’s milquetoast remarks yesterday. But that is not nearly enough, and right now for Joe Biden there are no good choices.

Florida Governor Ron DeSantis: “Our Elderly Population is The Priority For COVID Vaccines, Not Me”