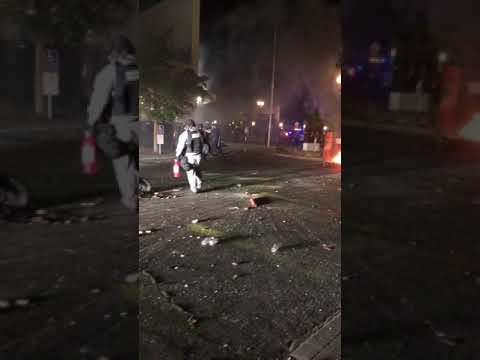 This piece includes more than a dozen clips I’ve gathered the past few days, but haven’t posted.

CNN’s Chris Cuomo raises eyebrows after claiming CNN doesn’t fact-check the Dems because they don’t lie like Trump.. and then accusing Sen. Tim Scott of ‘carrying water’ for the President https://t.co/KBYSduJbPQ pic.twitter.com/qSnI5iUGCR

Cuomo: We’re not fact-checking the Democrats because “they are not lying the way Trump does”

“Again, well, who are people going to believe? We’ll see who makes the better case. And yeah, you can fact-check it to death. We could fact-check this convention all night. People were saying you didn’t fact-check the Democrats,” Cuomo told fellow host Don Lemon. “They are not lying, the way Trump does. Do politicians lie? Of course, both parties engage in it. Yes, I’ll give you the full ‘Guilfoyle.’ But not like Donald Trump. Nobody lies the way this man does, has, and will that I’ve ever seen in politics. So — he’s lying to you.”

Kenosha Protesters Shout ‘Death to America!’ and ‘Kill the Police!’

Portland Police confiscated a bucket of projectiles from antifa at today’s riot. Condoms were filled with some unknown foul liquid and bottles were filled were urine. These were hurled at people at the right-wing rally in front of the Justice Center. #PortlandRiots pic.twitter.com/DsFHlbkFsA

It’s amazing what surrounding a small business w/ a few good men strapped w/ powerful weapons can do to maintain peace@VenturaReport is on the groundpic.twitter.com/TxQbX6UNt4

This is the moment I mentioned earlier. These armed citizens said they support the protests but not the riots because people are hurting their own community.

Later on, as a car dealership was under attack by rioters, one of the armed men stepped in and stopped it. pic.twitter.com/uSqprPXkSW

“Budget Motors” in #Kenosha is being vandalized by mob. Mutiple people breaking and entering. #Wisconsin pic.twitter.com/dNtAKwx1zp

“I got the phone cases!” A woman cheers as Boost Mobile is looted in Kenosha tonight #Kenosha #KenoshaRiot #KenoshaWi pic.twitter.com/OGH9tH0ZQy

Rioters use baseball bats to smash street lights & crosswalk signals through downtown as the crowd moved away from the courthouse #Kenosha #KenoshaRiots #KenoshaProtests pic.twitter.com/mGlbvHomjd

KENOSHA: The city is burning tonight as dozens of cars have been engulfed in flames after being targeted by #BLM arsonists

This is only one city block, but there were many other vehicles around the city completely destroyed

More than 40 at the very least pic.twitter.com/kJ6qCCqlUf

SWAT teams and tactical units arrive to try to get the situation under control #KenoshaRiots #Kenosha #Kenoshapolice pic.twitter.com/HmhbVbr37m