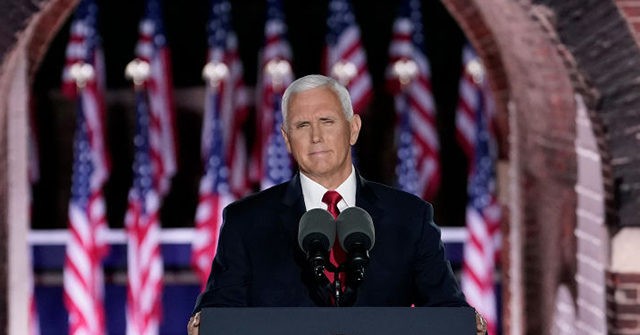 “Last week, Joe Biden didn’t say one word about the violence and chaos engulfing cities across this country,” he said, as rioting and looting continued while the vice president spoke. “Let me be clear: the violence must stop — whether in Minneapolis, Portland, or Kenosha.”

The president also alluded to the deaths of two people in Wisconsin, as rioting continued in Kenosha on Tuesday night.

“Too many heroes have died defending our freedoms to see Americans strike each other down,” he said.

Pence demanded law and order in the streets of America’s cities as the protests continued. He also praised President Donald Trump for standing by police officers working to keep the peace.

“President Trump and I know the men and women that put on the uniform of law enforcement are the best of us,” he said.

Pence welcomed the sister of slain federal law enforcement officer Dave Patrick Underwood, who attended the speech. Underwood was shot and killed during the riots in Oakland, California.

He reminded Americans that Joe Biden once agreed in an interview with the concept of defunding the police.

“Joe Biden would double down on the very policies that are leading to unsafe streets and violence in America’s cities,” he said.

Pence rejected the idea that Americans had to choose a side between black Americans or the police as the riots and protests continued.

“The American people know we don’t have to choose between supporting law enforcement and standing with African American neighbors to improve the quality of life in our cities and towns,” he said.