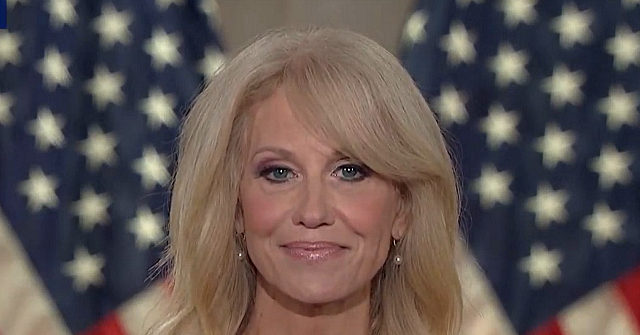 Counselor to the president, Kellyanne Conway, said at the Republican National Convention Wednesday night that Trump helped her “shatter a barrier” in politics by becoming the first woman to run a successful presidential campaign.

“He confides in and consults us, respects our opinions, and insists that we are on equal footing with the men,” Conway said. “President Trump helped me shatter a barrier in the world of politics by empowering me to manage his campaign to its successful conclusion. With the help of millions of Americans, our team defied the critics, the naysayers, the conventional wisdom — and we won.”

Conway continued by sharing her background of coming from a family of women and how they had values of “faith, family, and freedom.”

“I learned that, in America, limited means does not make for limited dreams. The promise of America belongs to us all. This is a land of inventors and innovators, of entrepreneurs and educators, of pioneers and parents, each contributing to the success and the future of a great nation and her people,” Conway said.

She mentioned a few of these everyday heroes, especially during the coronavirus pandemic, such as the teacher who took extra time out of her schedule to help her students adjust to distance learning and a nurse who just came off of a 12-hour shift to change her personal protective equipment (PPE) and do it all over again.

“These everyday heroes have a champion in President Trump,” she added.

Conway also spoke about what the president has done to combat the nation’s drug crisis. The president said, “This is so important, Kellyanne. So many lives have been ruined by addiction, and we’ll never even know it because people are ashamed to reach out for help.”

She continued to tout Trump’s actions to combat “the drug crisis next door” and the bipartisan legislation he has helped to solve it.

“This is the man I know and the president we need. He picks the toughest fights and tackles the most complex problems. He has stood by me, and he will stand up for you,” Conway said.