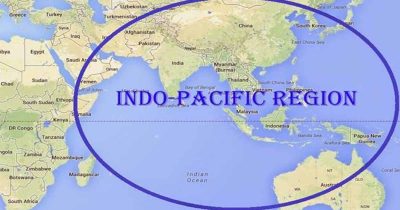 The Indo-Pacific Region (IPR) is a geopolitical area that comprises parts of the Indian and Pacific oceans. But there is more to it than that. The maritime domain is indeed an important theater for geopolitical competition. The rise of Chinese power across both the Pacific and Indian Ocean certainly challenges the very notion of a “security umbrella” (this notion persisted even after the end of the Cold War). Thus, the new geopolitical construct of the “Indo-Pacific” may be an attempt to deal with new realities. But theoretical constructs not only attempt to describe reality – they also may shape and change it. One could think of it as a war of concepts. The core of such “conceptual warfare” is to propose and to construct views and models through diplomatic talk and through the production of documents. In this arena, different visions often clash. Sometimes, they complement each other. It turns out Indonesia might have its own view of the IPR. It also has a strategic partnership with India which could further develop.

The seas that connect the Indian Ocean to the central Pacific Ocean run through the general area of Indonesia, giving it a strategic location. Jakarta has always aspired to become an unofficial leader of the ASEAN, which in its turn is a major partner of the Shangai Cooperation Organization. It is indeed the biggest economy and the largest country in the ASEAN group. One could say Indonesia has recently been quite successful in establishing its presence as an important player both in the Pacific and Indian Ocean.

On July 27th something important happened: Indonesia and India agreed to further expand their strategic cooperation in a number of areas, including technology sharing and industries. Further expanding their security and military ties was also discussed. According to some sources, there were talks about exporting Indian BrahMos cruise missiles to Indonesia and also about increasing security cooperation in the ocean. Chinese activities in Eastern Ladakh (a disputed Indian-Chinese border) must have been a topic – but no public statement was made. On June 15, the Chinese army attacked and killed 20 Indian soldiers there in the most fatal clash between the 2 countries in 4 decades (the number of Chinese soldiers killed in the standoff remains unknown). Such incident obviously increased tensions in the region. So far, troops on both sides haven’t fully disengaged. On top of that, according to an Asian News International report on Wednesday (19), India is now building a  road connecting Ladakh (for better troop movement).

Indonesia and India have a shared history of colonialism as well as civilizational ties which go back over two millennia. Geopolitically, both countries share the Indian Ocean maritime space. And both signed the “Shared Vision of India-Indonesia Maritime Cooperation in the Indo-Pacific” in 2018.

For Russia, the Indo-Pacific is a doorway for the East. For India and Indonesia, it is a northern doorway, bringing resources from the Arctic region to Asia. India’s concept of the Indo-Pacific may complement the so called Greater Eurasia project. For the US, in their turn, the IPR stretches from the American West Coast to the western seashores of India. In line with previous administrations, Trump has been pushing the notion of a “Free and Open Indo-Pacific” since 2017. Critics have compared such notion to former president Obama’s “Rebalance Strategy”.

China so far has often viewed the notion of the Indo-Pacific as an “exclusive” concept and as a containment – it would be merely an American strategy to connecting the Pacific and the Indian Ocean, thus constraining China while maintaining American hegemony in the region.

Some Chinese scholars, however, believe the concept may mature into something more interesting (from a Chinese perspective) and recently the Chinese media started using the term. One could call such game a kind of conceptual warfare.  Of course, the “Quad” – the quadrilateral group of India, Australia, Japan and the US –  still worries China, which perceives it as a potential “Asian NATO”. Basically, China “welcomes” an inclusive Indo-Pacific, as long as India and other countries dissociate themselves from the Quad. Indonesia’s attitude towards the Quad remains quite ambivalent, in line with its traditional “independent” (bebas dan aktif) foreign policy.

More concretely, Indian-Indonesian military cooperation certainly worries China also. Since 2005, India and Indonesia have a strategic partnership which includes maritime security cooperation. In 2014, there were Indian-Indonesia joint naval exercises, for example – with an increased number of navy vessels.

India and Indonesia have each their own views on the IPR, close as they may seem to be at times. Will such views clash with China’s own view? Can the IPR and Greater Eurasia complement each other? Will the US really use the geopolitical concept of IPR to project their influence and their own view of the Indo-Pacific onto other Asian countries? Time will tell. Be it as it may, countries in the region – such as Indonesia – have a say in the future of the Indo-Pacific. And both China and the US will need to keep that in mind.