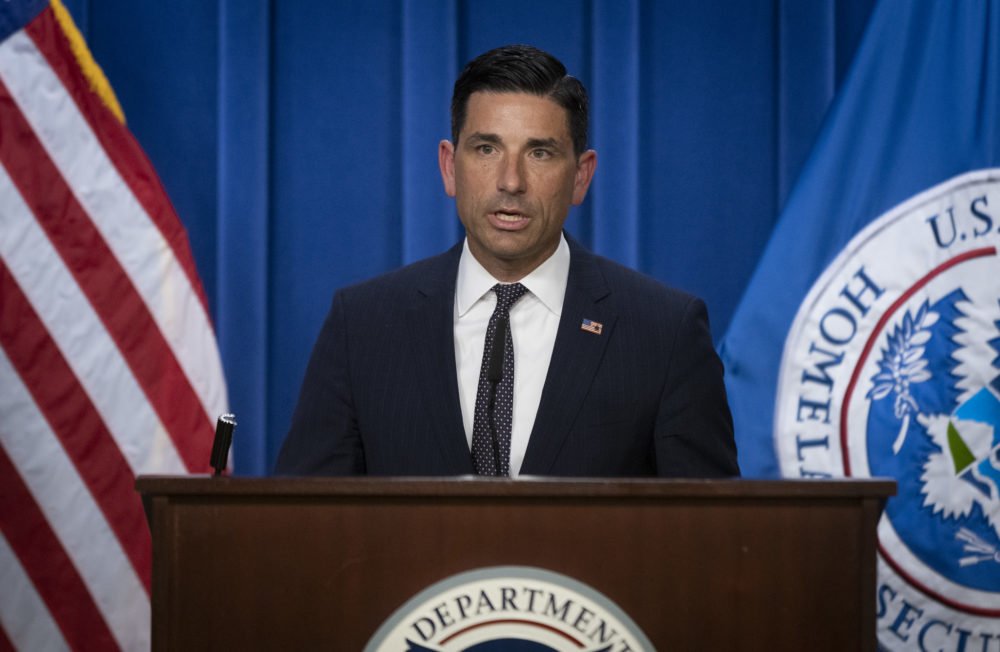 Acting Homeland Security Secretary Chad Wolf on Wednesday defended the rights of citizens to protect themselves against the anarchic mobs tearing through cities, while calling on local officials to step up and safeguard their constituents in order to fulfill a core function of government.

“Individuals have a right to protect themselves and their businesses and what they’ve worked all their life to build,” Wolf told The Federalist in an exclusive interview, regarding the current situation unfolding in the nation’s cities such as Kenosha and Portland, where private citizens have been forced to take protection into their own hands in the absence of local law enforcement providing adequate security.

“Fault lies with those local leaders and those local law enforcement of not doing their job,” said Wolf, who was officially nominated to fill the role as Homeland Security secretary Tuesday. “This country is about rule of law, and we need the police to step up any time we have criminal riots and looting occur. Law enforcement needs to step in, restore that rule of law, so that private citizens don’t have to do this or that, you don’t have counter-protests that become violent. That only happens in the absence of rule of law.”

While Wolf didn’t mention them by name, the prime example of private individuals protecting themselves from the virulent mob is the couple from St. Louis, Missouri, who rose to prominence this summer when videos of the pair waving firearms at threatening demonstrators went viral, becoming a hallmark moment for the utility of the Second Amendment.

“It was like the storming of the Bastille. The gate came down, and a large crowd of angry, aggressive people poured through,” Mark McCloskey told a local St. Louis outlet, explaining he and his wife were “in fear for our lives.”

“I was terrified that we’d be murdered within seconds. Our house would be burned down, our pets would be killed.”

Though a reasonable person would celebrate the McCloskeys’ self-defense without a single injury on either side, the St. Louis prosecutor opted to charge the couple with felonies, charging them with unlawful use of a weapon that could carry a sentence of up to four years in prison.

The episode immediately became a rallying cry for the Second Amendment, earning attention and support from gun advocates nationwide, including the White House and the Missouri Republican governor, who pledging a pardon for the pair if they were convicted.

The two even secured a slot at the Republican National Convention on Monday, addressing the nation during prime time to share their story and warn of the consequences that electing left-wing activists who oppose gun rights and support dismantling police departments would have on public safety.

Wolf’s defense of such citizens comes just as a second wave of civil unrest threatens to break out nationwide, sparked by another politicized police shooting in Kenosha on Sunday. The dust has yet to settle from the first wave, which kicked off in May following the death of George Floyd.

On Tuesday, anarchic militants in Portland continued their 90th consecutive night of terror, having already injured about 300 sworn state and federal agents with injuries ranging from minor wounds to serious eye damage, after protesters launched mortar-style fireworks and pointed lasers that cause permanent blindness.

Meanwhile, in Kenosha — the nation’s latest hotspot for domestic terror after a Sunday police shooting landed Jacob Blake, who is black, in the hospital — violent demonstrations, wherein entire car dealerships and buildings were set on fire, turned deadly when gunshots rang out among rioters, killing two and leaving a third in the hospital. As of Wednesday, more than 30 people have been killed from riots since Floyd’s death.

BLM (Burn, Loot & Murder) terrorists broke the jaw of 70 year old man in Kenosha who was trying to put out a fire in his store that they started. pic.twitter.com/whiw1vixoH

Despite the lawlessness wrecking Wisconsin cities, with riots spreading from Kenosha to Madison, the state’s Democratic Gov. Tony Evers, who declared a state of emergency Tuesday, initially rejected additional National Guard troops even as local officials pleaded for the support. President Donald Trump announced Wednesday that Evers relented and is now accepting federal reinforcements to restore order to the failing state.

…TODAY, I will be sending federal law enforcement and the National Guard to Kenosha, WI to restore LAW and ORDER!