A CNN chyron reporting on the riots exploding in Kenosha, Wisconsin, during the early hours of Tuesday morning appeared to have gone unnoticed. 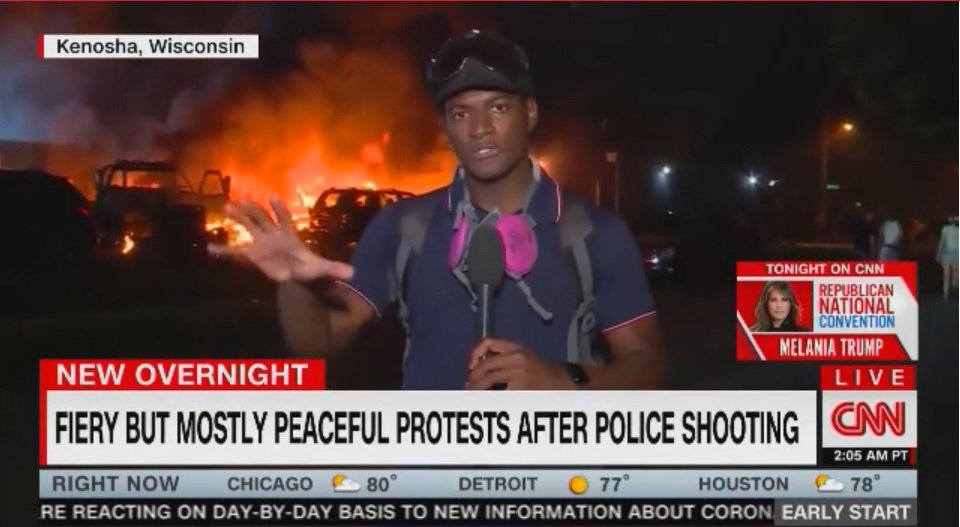 The footage features Jiminez explaining to viewers that while the city burns to the ground behind him, the so-called protesters destroying the blue-collar midwestern town were being “mostly peaceful.”

“What you’re seeing behind me is one of multiple locations that have been burning in Kenosha, Wisconsin, over the course of the night,” Jiminez said, reporting that daytime demonstrations marked a stark contrast to the riots occurring behind him after Jacob Blake’s shooting by Kenosha police on Sunday. “The common theme that ties all of this together is an expression of anger and frustration over what people feel like has become an all-too-familiar story.”

The early-morning episode Tuesday resembles a similar incident in May when MSNBC’s Ali Velshi stood in front of a liquor store burning behind him and called the riots surrounding the camera crew “mostly a protest” that is “not generally speaking unruly.”

“But fires have been started,” Velshi noted.

“This mostly a protest. It is not, generally speaking, unruly.

But fires have been started.”

MSNBC reporter says protests in Minneapolis are not “generally speaking, unruly” as buildings burn in the background. pic.twitter.com/IzzEmKgxhM

On Wednesday, CNN’s chyron writer accidentally corrected its network’s television headline to describe the events in Kenosha as “Violent Protests” for 15 seconds before editing the caption to read simply “Protests.”

Kenosha became the next hotspot of American civil unrest after a police shooting of a black man Sunday set off a new wave of rioting, even after the first wave, following George Floyd’s death, had barely begun to settle.

On Tuesday, Wisconsin’s Democratic Gov. Tony Evers declared a state of emergency over the unrest. He accepted federal reinforcements to support police on Wednesday after initially refusing White House help to quell the chaos. The demonstrations turned deadly Tuesday night when three people were shot, leaving two dead and another wounded, amid the turmoil that intensified without enough law enforcement officials present.

Libya: When Historical Memory is Erased