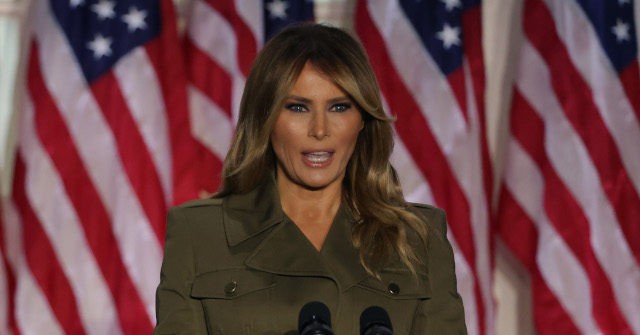 First lady Melania Trump delivered a rare rousing address firmly backing her husband’s reelection to the White House on Tuesday night at the Republican National Convention (RNC), during which she made clear she and President Donald Trump do not forget who sent them to the White House.

“I know I speak for my husband and the entire family when I say we have not forgotten the incredible people who were willing to take a chance on a businessman who had never worked in politics,” the first lady said in her speech’s opening. “We know it was you who elected him to be commander in chief, and we know it is you who will carry us through again. We were humbled by the incredible support then, and we are still grateful today.”

Later in the speech, Melania Trump spoke of how she and her husband are “inspired by the millions of Americans who wake up each day with the simple yet courageous goal of providing for their families and keeping them safe.”

“You are the backbone of this country,” she said. “You are the people who continue to make the United States of America what it is—and who have the incredible responsibility of preparing our future generations to leave everything even better than they found it. Just as you are fighting for your families, my husband, our family, and the people in this administration are here fighting for you.”

Then she lit up the fake news media and Democrats attacking her husband, and noted that despite the historic opposition he has faced that he has not and will not ever back down.

“No matter the amount of negative or false media headlines or attacks from the other side, Donald Trump has not and will not lose focus on you. He loves this country, and he knows how to get things done,” Melania Trump said. “As you have learned over the past five years, he is not a traditional politician. He doesn’t just speak words, he demands action and he gets results.”

Later in the speech, Melania Trump again laid out how Trump will not stop fighting for working Americans despite the opposition and attacks.

“In my husband you have a president who will not stop fighting for you and your families,” she said. “I see how hard he works each day and night, and despite the unprecedented attacks from the media and opposition, he will not give up. In fact, if you tell him it cannot be done he just works harder.”

She also in one moment ripped rioters and looters and those trying to rewrite American history.

“Like all of you, I have reflected on the racial unrest in our country. It is a harsh reality that we are not proud of parts of our history. I encourage people to focus on our future while still learning from our past,” the first lady said. “We must remember that today, we are all one community, comprised of many races, religions, and ethnicities. Our diverse and storied history is what makes our country strong, and yet we still have so much to learn from one another. With that in mind, I’d like to call on the citizens of this country to take a moment, pause, and look at things from all perspectives. I urge people to come together in a civil manner so we can work to live up to our standard American ideals. I also ask people to stop the violence and looting being done in the name of justice, and never make assumptions based on the color of a person’s skin. Instead of tearing things down, let’s reflect on our mistakes, be proud of our evolution, and look to our way forward. Every day let us remember that we are one nation under God, and we need to cherish one another.”

Towards the beginning of her speech, Melania Trump expressed empathy for the American public struggling through the coronavirus pandemic and promised her husband will not rest until it is defeated.

“I want to acknowledge the fact that since March, our lives have changed drastically,” she said. “The invisible enemy, COVID-19, swept across our beautiful country and impacted all of us. My deepest sympathy goes out to everyone who has lost a loved one, and my prayers are with those who are ill or suffering. I know many people are anxious and some feel helpless. I want you to know you are not alone. My husband’s Administration will not stop fighting until there is an effective treatment or vaccine available to everyone. Donald will not rest until he has done all he can to take care of everyone impacted by this terrible pandemic.”

She also celebrated the 100th anniversary of the 19th Amendment to the Constitution, which gave women the right to vote—and then told the story of how she moved to America as an immigrant seeking a brighter future after having grown up behind the Iron Curtain of communism in Eastern Europe.

“Growing up as a young child in Slovenia, which was under communist rule at the time, I always heard about an amazing place called ‘America’—a land that stood for freedom and opportunity,” Melania Trump said. “As I grew older it became my goal to move to the United States and follow my dream of working in the fashion industry. My parents worked very hard to ensure our family could not only live and prosper in America, but also contribute to a nation that allows for people to arrive with a dream and make it a reality. I want to take this moment to thank my mother and father for all they have done for our family: it is because of you that I am standing here today. I arrived in the United States when I was 26 years old. Living and working in the land of opportunity was a dream come true, but I wanted more. I wanted to be a citizen. After ten years of paperwork and patience, I studied for the test in 2006 and became an American citizen. It is still one of the proudest moments in my life because with hard work and determination, I was able to achieve my own American dream. As an immigrant and a very independent woman, I understand what a privilege it is to live here, and to enjoy the freedoms and opportunities that we have.”

That American dream, she said, has been a feature of her time as first lady.

“As first lady, I have been fortunate to see the American dream come true over and over again,” she said. “I have met many inspiring women, children, parents, and families who have overcome life-changing issues that include addiction, homelessness, family members who are ill or have passed away, abuse of all kinds, and many other challenges that would make most people give up. The past three and a half years have been unforgettable. There are no words to describe how honored, humbled, and fortunate I am to serve our nation as your first lady. After many of the experiences I’ve had, I don’t know if I can fully explain how many people I take home with me in my heart each day. From brave soldiers who give up so much so that we can be free, to children of all circumstances who I have met around the world… thank you for inspiring me. It is my greatest honor to serve you.”

Throughout the speech, Melania Trump wove in some vignettes from interesting and inspiring people she has met during her husband’s time in office.

“On my first international trip as first lady, my husband and I visited places of great significance to the three major religions—Islam, Christianity, and Judaism,” she said in one such instance. “One special memory from that trip is of a young boy I had the privilege of visiting while at Bambino Gesu Hospital in Rome, Italy. While there, I read the little boy a story and learned that he and his family had been waiting for a heart for a very long time and he had a grim prognosis. His situation brought my staff and me to tears, and we spoke of little else as we flew to Belgium for the next part of our trip. Upon landing just a few hours later, we learned that a heart had been donated and would be going to the little one. I think about him often, along with so many amazing and strong young patients across our own country.”

She also discussed her Be Best campaign.

“In fact, it is to help ensure a better future for our next generation that I launched Be Best, my initiative to help children achieve their fullest potential,” Melania Trump said. “Be Best has one simple goal: teaching youth about the importance of their well-being both mentally and physically. This also includes understanding online safety and the dangers of opioid and drug abuse. Through Be Best, my office and I have been able to highlight people, programs, and organizations that are doing extraordinary things in our country and around the world. I continue to believe that by shining a light on these positive examples, others across the country and globe will become inspired to do their part for our next generation. Helping children is not a political goal—it is our moral imperative.”