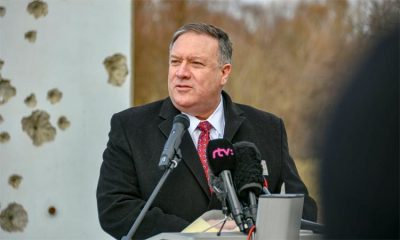 On Tuesday, Pompeo addressed the Republican National Convention from Jerusalem, his remarks prerecorded. See below on what he said.

Was his unprecedented act by a US secretary of state unlawful?

According to the 1939 Hatch Act, US executive branch employees are prohibited from engaging in political activities or using federal funds for this purpose — except for the president and vice president.

In US Civil Service Commission v. National Association of Letter Carriers (1973), the Supreme Court upheld the Hatch Act by a 6 – 3 majority.

“It is no concern of government what an employee does in his or her spare time, whether religion, recreation, social work or politics is his hobby, unless what he or she does impairs efficiency or other facets of the merits of his job.”

The above three justices also noted that limiting First Amendment rights should not be a federal employment requirement — other than what may be “narrowly tailored” to prohibiting a specific activity.

Under 3 FAM 4123.3, State Department “employees, spouses, and family members are prohibited from engaging in any partisan political activities abroad.”

“Partisan political rallies are not permitted on embassy or consulate premises.”

In response to Pompeo’s Tuesday address, House Oversight and Investigations Subcommittee chairman Joaquin Castro initiated a probe into whether he breached federal law by addressing the GOP National Convention.

According to the State Department, none of its resources were used to prepare or deliver his remarks.

Castro claims he breached the Hatch Act and State Department regulations by engaging in partisan political activities from abroad that are related to US elections.

According to a December 2019 House Foreign Affairs Committee Office of the Legal Advisor:

“Senate-confirmed presidential appointees may not even attend a political party convention or convention-related event.”

In July, citing from a State Department memo signed by Pompeo, Castro said the following:

“It’s absolutely unacceptable that a sitting US Secretary of State, America’s top diplomat, would use official taxpayer-funded business to participate in a political party convention, particularly after the State Department published guidance that explicitly prohibits such activity.”

“This action is part of a pattern of politicization of US foreign policy, for which President Trump was impeached by the House of Representatives, that undermines America’s standing in the world. The American people deserve a full investigation.”

Castro gave US Deputy Secretary of State Stephen Biegun until September 1 to submit answers in writing to the House Foreign Affairs Committee as to whether Pompeo used department resources to prepare and deliver his remarks — until September 10 to provide the committee with related documents and receipts.

According to McClatchy, Pompeo’s speech to the GOP National Convention “was cleared by four teams of lawyers,” citing ‘two (unnamed) sources close to the secretary,” adding:

His politically related speech delivered from abroad on official business “rais(ed) concerns in both Washington and Jerusalem, with two Israeli officials telling McClatchy that the event could aggravate a growing political divide over Israel in the United States.”

“His lawyer, the State Department lawyers, RNC lawyers, White House lawyers have all worked on his appearance to make sure it is completely lawful and appropriate, including screening and approving all of his remarks.”

Trump “personally requested that Pompeo make the speech, the source said, speaking on condition of anonymity.”

It was paid for by “his campaign and the Republican National Committee.”

“Secretaries of State, as far as I can find, have never appeared at a political convention.”

“Jerusalem should not be a prop in the Republican convention. Pompeo should not tarnish his office by this unprecedented action.”

Blaming Beijing for “covering up the ‘China virus’ and allowing it to spread death and economic destruction in America and around the world (sic)” is one of countless examples of how the US blames others for its own unlawful actions.

The SARS-Cov-2 virus that produces COVID-19 disease was made-in-the-USA and exported worldwide.

He lashed out against Iran, the Middle East’s leading proponent of peace, stability, and cooperative relations with other countries.

He falsely claimed that the Trump regime “wiped out…ISIS,” a jihadist group created and used by the US as proxy forces against targeted countries.

He praised Trump for abandoning the landmark INF agreement with Russia and JCPOA nuclear deal.

These and countless other US actions further global instability instead of stepping back from the brink of endless preemptive wars and other hostile actions that define Washington’s geopolitical agenda.

Featured image is from LobeLog