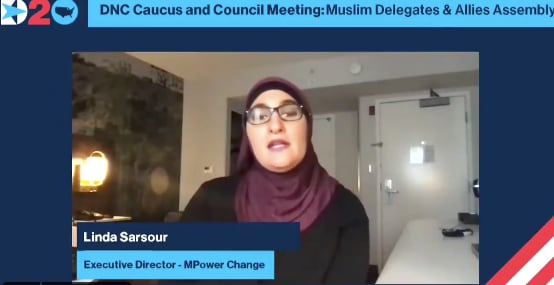 The Biden campaign privately expressed an apology to Linda Sarsour after publicly condemning her radical anti-Israel and anti-semitic comments, according to a report by the Middle East Eye. Sarsour is known for supporting Nation of Islam leader Louis Farrakhan who regularly calls Jews “satanic,” and has called for “jihad” against President Donald Trump.

The controversy started when the DNC hosted the radical leftist during a section of the convention for Muslim Delegates and their allies. Jews on both sides of the aisle were angered by her appearance.

The Biden campaign reacted to the controversy and publicly condemned her.

“Joe Biden has been a strong supporter of Israel and a vehement opponent of anti-Semitism his entire life, and he obviously condemns her views and opposes BDS, as does the Democratic platform,” campaign aide Andrew Bates said. “She has no role in the Biden campaign whatsoever.”

The pressured apology was reported across the media. It now seems that the Biden team is walking back on their statement as they seem to have privately apologized.

The Middle East Eye reported that “In a private call with dozens of prominent activists on Sunday, Ashley Allison, national coalitions director for the Biden campaign, said she was “sorry” for the comments that a campaign spokesman made against Sarsour,” the alleged comments seem to retract the earlier condemnation.

This brings up many questions about Biden’s actual position on Sarsour and her anti-semitic beliefs.

Allison reportedly said she understands “the pain” the condemnation caused the Muslim community.

Biden has yet to make an official statement about Sarsour and the radical ideals that alienate an entire voting population.

Gov. Newsom apologizes for attending guideline-breaking party, says it was a ‘bad mistake’