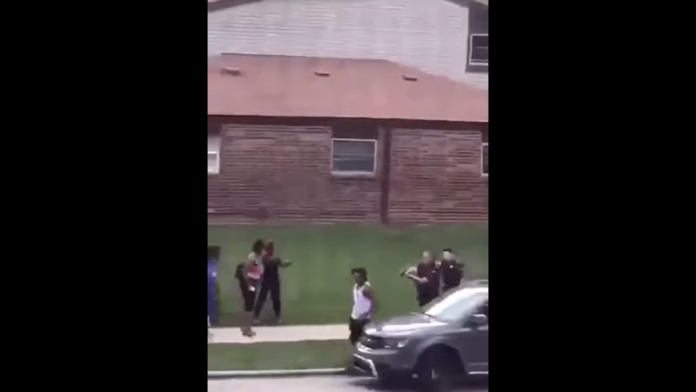 KENOSHA, Wisconsin — An unruly crowd of protesters swarmed the scene of an officer-involved shooting in Kenosha on Sunday.

It all started around 5:00 p.m. local time when Kenosha Police Officers were sent to the 2800 block of 40th Street for a domestic incident.

Video footage posted on social media shows the man refusing police orders while it appears the officers shout, “drop the knife,” and “put it down.” Witnesses say the man was unarmed.

The unidentified man then attempts to get into an SUV when at least one officer fires multiple rounds toward his back.

First responders provided aid to the suspect whom they say is still alive. He was transported via Flight for Life to Froedtert Hospital in Milwaukee. The person is in serious condition, police said.

Kenosha Sheriff’s Department and Wisconsin State Patrol were requested so that the scene could be turned over to an agency other than Kenosha Police.

The situation escalated into the night where protesters smashed police cars and threw rocks at cops in riot gear. The courthouse was also broken into and set ablaze.

This is what it looks like at the scene of @KenoshaPolice officer-involved shooting where a large crowd formed with some people getting on top of squads and breaking the windows. #Kenosha @tmj4 pic.twitter.com/NElRFG0vDY

#BREAKING: Large crowd has formed outside the scene of an officer-involved shooting in #Kenosha. @KenoshaPolice say they a man is seriously hurt. People are now breaking the windows of cop cars. Warning – expletives @tmj4 pic.twitter.com/pKqbSKrZQY

A protest is happening now after a domestic incident turned into an officer-involved shooting in #Kenosha at 40th St. & 28th Ave.

Police confirm one person is in serious condition.

People on scene say the apparent victim is a man, and father. @CBS58 pic.twitter.com/jsg2ANSD28