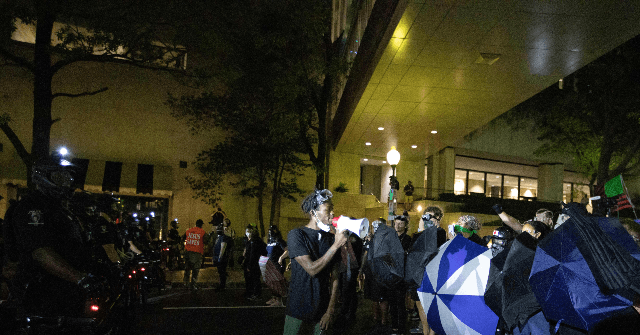 Boisterous left-wing protesters demonstrating against the Republican National Convention (RNC) intimidated diners at a Charlotte, North Carolina, restaurant Saturday night while they clogged up the streets.

Protesters engaged with a man leaving a restaurant in Charlotte’s South End neighborhood around 11:00 p.m., and called him a “gentrifier,” the Charlotte Observer reported.

Demonstrators in the South End, marching in their second night against the RNC to protest police brutality and neighborhood gentrification, yelled, “White Silence Equals Violence.”

A person in the crowd also appeared to spray silly string at someone appearing to confront the protesters.

Police made several arrests after midnight. The night’s protests were, for the most part, nonviolent, but at times, tense. Police still had to deploy pepper spray to break up the crowd.

At least five protesters were arrested during the exchange.

WBTV reported that the far-left group Charlotte Uprising was posting on social media advertisements about protests beginning at Marshall Park at 8:30 p.m. this weekend. Their message was to stop social injustice and protest against President Donald Trump and the police.

Although the RNC has a scaled back presence this year, delegates began arriving in Charlotte this weekend, and Trump is expected to make an appearance in the city on Monday.