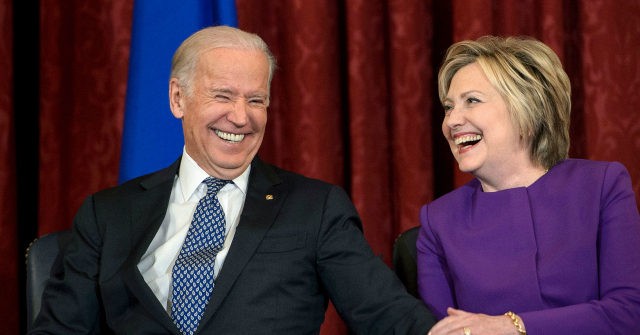 President Donald Trump revealed the differences between running against former Vice President Joe Biden and former Secretary of State Hillary Clinton as he delivered a speech at the Council for National Policy meeting in Virginia on Friday.

“Clinton is much smarter but not a likable person,” Trump said. “Joe is not nearly as smart, but he’s more likable.”

The president spoke about the election during his address, which came on the heels of Biden’s nomination speech at the Democratic National Convention.

Trump admitted that he would probably rather face Clinton than Biden in an election.

“So, you know, I don’t know, maybe I’d rather have the smarter person,” he said. “Who cares about personality, right? But that’s the difference. Very simple, isn’t it?”

The president recalled when Clinton demanded in 2016 that he accept the results of the presidential election.

“She should have asked that question to herself,” Trump said. “She’s like a crazed lunatic. She’s a lunatic. She is something, I’ll tell you.”

Trump added that he was delighted with Biden’s decision to choose Sen. Kamala Harris as his running mate.

“That was my number one draft pick,” he said, recalling that Harris ended her presidential campaign in December before the voting even started in the Democrat primary.

“She didn’t even get to Iowa. She never got there. She didn’t want to take a vote. That’s how bad she was,” Trump said. “Don’t you want to pick a person that’s gone in the opposite direction?”