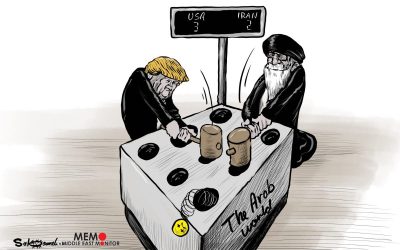 Its provisions and the P5+1 approved nuclear agreement are binding international and US constitutional law under the Supremacy Clause — Article VI, Clause 2.

DJT unlawfully withdrew from the JCPOA in May 2018, giving his regime no legal say over its implementation or whatever relates to it.

The JCPOA provision lets any of its signatories reimpose veto-proof sanctions on Iran that became null and void when the agreement took effect in January 2016.

Only JCPOA signatories Russia, China, Britain, France and Germany may legally invoke snapback now — not the US after illegally abandoning the binding agreement.

Remaining signatories unanimously oppose snapback because it would undo years of diplomatic efforts that went into establishing the JCPOA they want preserved.

Time and again, the US does what it pleases, operating extrajudicially and forcing its will on other nations by pressure, bribes, bullying, threats, and brute force when other actions fail.

At his unilateral discretion in defiance of the rule of law, the Security Council ruling, and unanimous will of remaining JCPOA signatories, Trump unlawfully claimed the right to “prevent Iran from developing a nuclear weapon” it doesn’t seek, never did, and urges their elimination regionally and worldwide.

On Wednesday, Pompeo said the following:

On Thursday, he’ll “meet with the (SC) president and…secretary general (to) provide notification of the snapback, and then 30 days from now all the sanctions that were in place will resume (sic).”

He threatened Russia, China, and other nations, saying the Trump regime will hold them accountable if reject its will on Iran.

He falsely claimed that “European people” are not safe because the Security Council overwhelmingly rejected the Trump regime’s resolution to extend the expiring arms embargo on Iran indefinitely.

“US recourse to Dispute Resolution Mechanism in (SC Res.) 2231 has NO LEG TO STAND ON.”

“America is no longer a member of the JCPOA to use (snapback), and all (its other signatories) condemned the US effort,” adding:

“The world knows what will happen if the (Trump regime) takes this dead-end path.”

“They…burned the bridge and imagine that (it’s still there for them) to cross.”

Will remaining JCPOA signatories Russia, China, Britain, France and Germany break with the Trump regime’s unlawful invoking of snapback by fully supporting the agreement (and SC Res. 2231) affirming it to prevent the deal from unraveling altogether?

Last Friday, the Trump regime’s attempt to extend an arms embargo on Iran indefinitely was overwhelmingly rejected by SC members, the Dominican Republic alone supporting what defied the JCPOA’s letter and spirit.

Will SC members support the rule of law by refusing to go along with unilaterally and illegally imposed snapback on Iran by the US?

The fate of the JCPOA hangs in the balance.