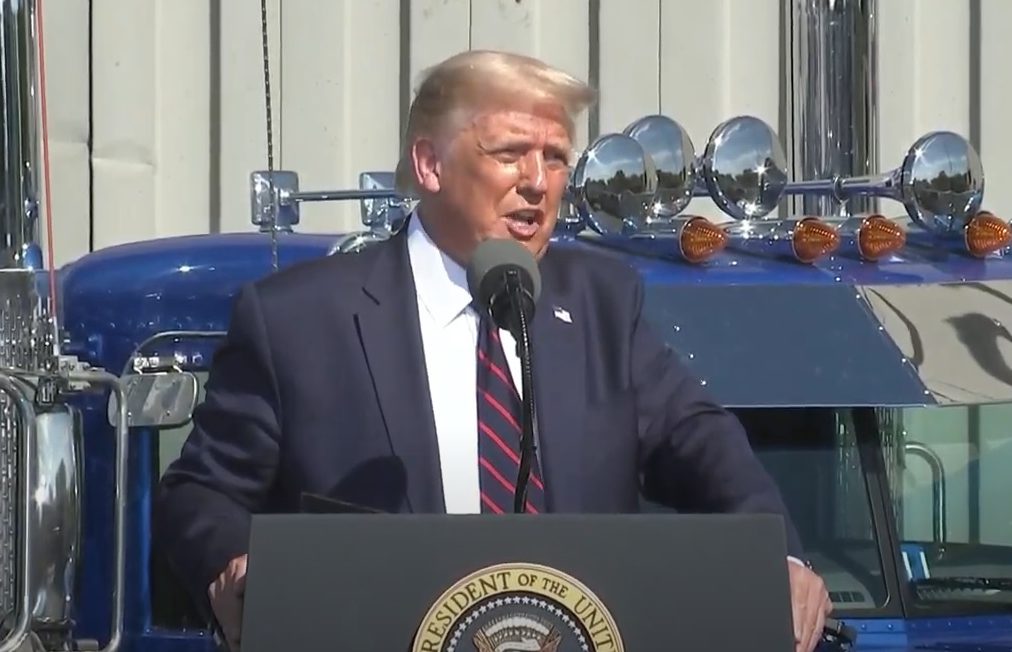 In his final visit on a tour of battleground states this week, Trump painted his November opponent as a vehicle for the left’s revolution aiming to disarm police, disparage dissent, pledge allegiance to socialism, and accelerate American carnage in a speech likely to preview the theme of next week’s Republican convention, also slated to be held online.

“They want to cancel you,” Trump told the Pennsylvania crowd. “Totally cancel you. Take your job. Turn your family against you for speaking your mind, while they indoctrinate your children with twisted, twisted world views that nobody ever thought possible.”

While standing at the podium under the hot August sun near Biden’s childhood home, the president prophesized a dark future for crumbling American cities suffering from a historic summer of civil unrest concurrent with rising homicides while Democratic mayors heed protestor demands to dismantle law enforcement.

“If you want a vision of your life under a Biden presidency, think of the smoldering ruins of Minneapolis, the violent anarchy of Portland, and the bloodstained sidewalks of Chicago, and imagine the mayhem coming to your town,” Trump said. “You’re not going to have law and order.”

“If you want a vision of your life under Biden presidency, think of the smoldering ruins of Minneapolis, the violent anarchy of Portland, at the bloodstained sidewalks of Chicago, and imagine the mayhem coming to your town.” pic.twitter.com/Uga8qCb064

In the afternoon speech, Trump derided Democratic lockdowns, demonized demands for open borders, and disavowed sanctuary cities, branding his Democratic opponents as seizing control of U.S. enterprise while allowing criminals to run rampant on crime sprees paid for by the American worker.

Trump also mocked charges that from the Oval Office he is trying to rig the election through manipulation of the Postal Service. That is a widely discredited conspiracy theory that’s gained traction on the internet and drew the endorsement of Democrats who just months ago launched an impeachment over a phone call. The president said Democrats could only win by engaging in such a conspiracy.

While lambasting Democrats just hours ahead of their convention finale, Trump made sure to tout his administration’s accomplishments. He showcased its progress in the War on Terror and celebrated the landmark peace deal he brokered between Israel and the United Arab Emirates (UAE). Trump also trumpeted changes on trade, such as pulling out of the Trans-Pacific Partnership (TPP), renegotiating the North American Free Trade Agreement (NAFTA) and remaining aggressive on China while the U.S. economy soars even in the midst of forced coronavirus shutdowns of economic life.

Earlier in the week, the president also visited Minnesota and Wisconsin competing with the Democratic convention to sweep national headlines. He narrowly lost the former and captured the latter over former Secretary of State Hillary Clinton in 2016. In Pennsylvania, Trump beat Clinton by less than a full percent and 45,000 votes to land its 20 delegates in the Electoral College.